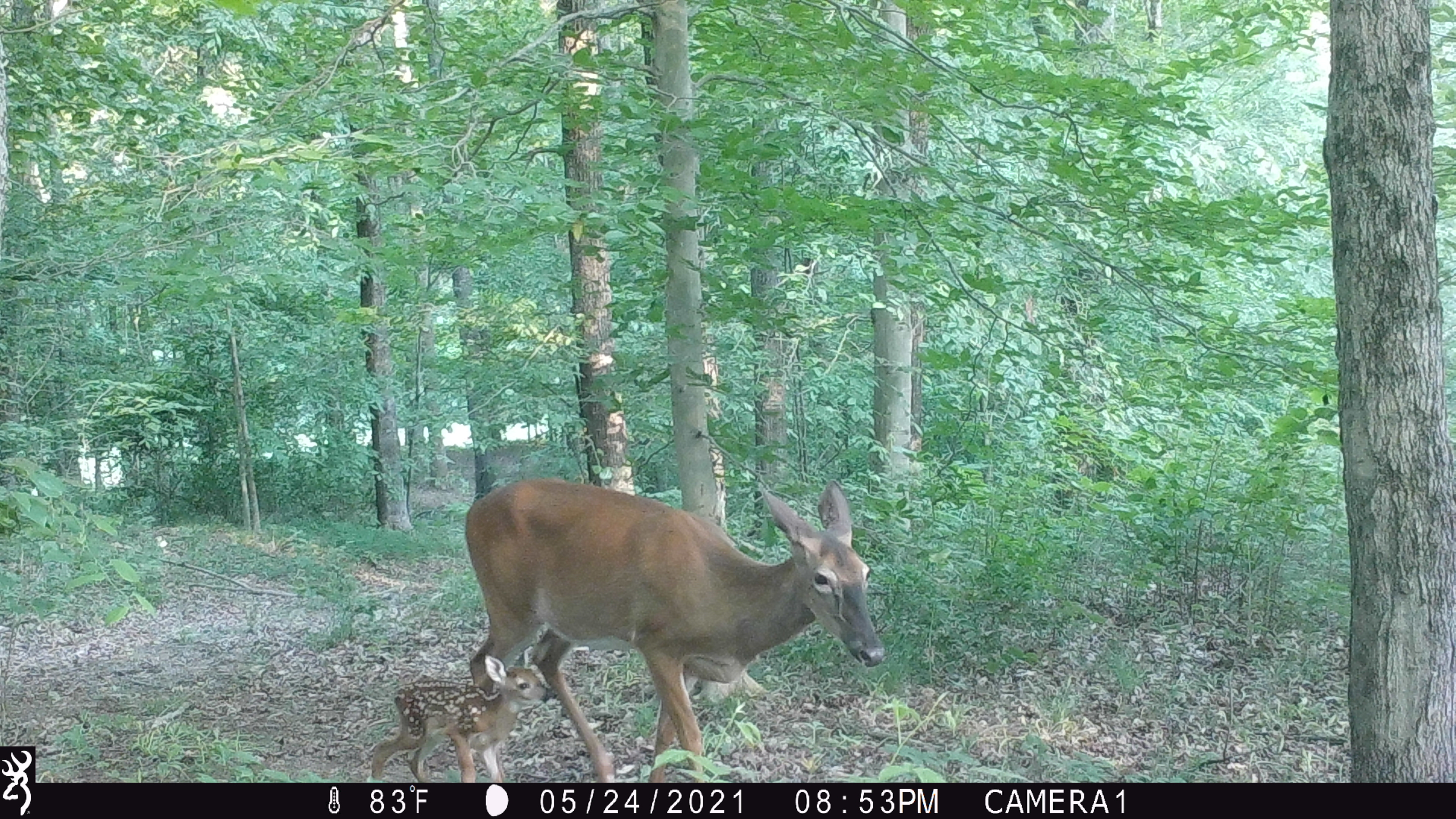 It’s already the end of June and starting October 1 deer archery season will be here.  I did something this year I’ve not done before.  I left my trail cameras out to see what I could see once the season ended.

I was able to get a couple pictures of a specific buck that I never saw during daylight hours last hunting season.  Once the season ended he did show up during daylight and I was happy that he had survived. As January progressed into February I was able to get another picture after he shed one of his antlers.  I got another after he had shed both antlers.  There were also several does that had survived the hunting season, which means they would hopefully be there next season.

As winter approached I was able to get some really cool pictures of the deer in snow and sampling the trophy rock I put out for them. I even got pictures of a coyote and one day a huge swarm of blackbirds were all over the ground where I had my cameras.

As winter went away and the woods started greening up it was amazing how fast the woods had changed from it’s wide open look with no leaves to the full forage of leaves by mid May.  Then I started getting pictures of does with fawns.  Several pictures had a doe with twins.  Lots of does were visiting the trophy mineral rock I had put out. I even had several pictures of 3 and 4 bucks as their antlers started growing.  It was nice to know that there would be some buck choices this coming season.

I went out recently one evening about 7:30 to swap out my camera memory cards.  I saw several does and fawns munching on new growth of soybeans.  Then I spotted a really nice buck on my drive out.  It could be the buck from last year that I had pictures of but wasn’t sure.  His beautiful velvet antlers had already grown past his ears.  I immediately thought that he could be a really nice buck come October.

I quickly took a picture on my cell phone and texted a picture of the buck to my grandson and he said “now they show up!”  He had hunted several times with me last season during his first deer hunting experience and we didn’t see any deer those particular days.  I assured him that I’d be checking the cards up and through hunting season and would keep giving him updates.

If you normally don’t leave your trail cameras out all year long I suggest you do.  I have a couple Browning trail cameras and the batteries last over two years.  It’s amazing how long they last.  They were still at 75% battery life even with being out since last summer. Watching how the woods changes from fall through winter and into spring and summer gives you a great idea how the deer in areas you hunt change or keep the same patterns on their movement.  I even got a picture of a big Herford bull that had wondered into the woods I hunt.  Since the property owner doesn’t have cattle I texted him a picture of the bull and thought he might like to let the neighbors know.  I only had pictures of him one day but it was really cool to see that picture when I wasn’t expecting it.

Another thing trail cameras do if you keep them out all year long is give you a great idea of deer movement and where you might want to put your stands this upcoming season.  The deer in this particular woods are using the same trails as they did in the fall.  They give me a great idea of time of day that they travel through and which direction they come from.  I know travel patterns can change from season to season but having that knowledge is very helpful if you’re targeting a specific deer that you’d like to harvest. Even though they don’t come through every day they are somewhat predictable in their habits.

The investigation conducted by Indiana Conservation Officers and the Indiana State Fire Marshal's Office has concluded that the fire at Hoosier Hills Marina that occurred on February 19 was accidental in nature and most likely was caused by an electrical malfunction. The fire did an estimated $2.5 million worth of damage.

Hunters can now apply for special reserved dove hunts at Fish and Wildlife areas including Glendale.  The dates of the reserved hunts are Sept. 1 or 2.BlueGrass Fish & Wildlife Area will also be hosting dove hunts on Sept. 2, 5, & 7. Drawn hunters may bring one hunting partner with them. Hunters will be selected through a random computerized drawing.  An email will be sent to applicants who are drawn as well as those who are not drawn, once the draw has been completed. Results are available within two weeks after the application period has closed.  To view draw hunt results go to https://secure.in.gov/apps/dnr/portal/#/home and click the link to see the status of your reserved hunt registrations or login to your account and view your Hunt Registrations in your online dashboard. The link from the home page will only show hunts that you registered for when the date of the hunt is still upcoming. Logging in to your account online is required for you to see the full history of your past hunt registrations (previous years).

Indiana Private Land Access (IPLA) deer hunts will begin on Sept. 26 for the youth season. Additional hunt dates and locations can be seen when applying. Drawn hunters may bring one non-hunting partner with them.

Lincoln and Spring Mill state parks will be participating in special state park deer reduction hunts again this year. Hunters can choose to apply for the hunt dates of Nov. 15-16 or Nov. 29-30. Hunters may list up to two hunting partners for each hunt period and must list the hunter’s name when applying.