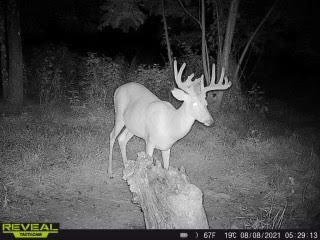 The statewide archery deer season starting Oct. 1, Indiana Conservation Officers remind hunters to stay safe. The various deer hunting seasons run through Jan. 31, 2022. It is estimated that more than 300,000 people will participate in some form of deer hunting in Indiana during that span. The most common injuries during deer seasons are accidents involving tree stands and elevated platforms. Hunters should follow the safety tips listed below when hunting from an elevated position:

Channel catfish are coming to a fishing spot near you! Our biologists will be stocking approximately 67,000 catfish in more than 130 public fishing sites across Indiana this fall. State fish hatcheries began pulling catfish from their ponds earlier this week and plan to have all the fish stocked by Nov. 15. Check out our plan for locations and their requested numbers and sizes of fish: https://bit.ly/2Wk87Pe. Read more about the efforts: https://bit.ly/3EWLOk5.

Now that archery season is here I thought I’d take a look at some deer hunting myths and give some insight into them.

Many hunters believe that big bucks always move at dawn and dusk. Normally that’s true but not always.

If you have always hunted the first two hours and the last two hours of daylight, you should put in more stand time. One old saying is still true: You can’t shoot a buck back at camp. Stay on post later in the mornings, until 11. Go in early in the afternoons and get settled by 2 p.m., latest.

The cooler the weather the better, so definitely maximize your time on stand on chilly days during the season. Deer linger longer around food sources and in nearby funnels in the mornings, and they’ll often move earlier in the afternoons. And this goes without saying: During the first 15 days of November, stay out all day — you might kill a giant anytime.

When whitetails are still on summer patterns and locked into a bed-to-feed routine in early bow season, don’t hesitate to hunt your best stand two, three, or maybe even four days in a row as long as a favorable wind holds. Though more unpredictable, this can also work when it’s cold and snowy in December, and run-down bucks are drawn to one of the last best food sources.

If and when you hunt a stand for multiple days, be as quick, quiet, and scent-free as you can on the walk in and out. The less intrusive you are, the better your chances of striking before the deer patterns change and the spot goes cold.

Some hunters believe that you should stay out of your best spots until the wind and rut conditions are just right, then move in and hunt a buck. Generally that’s a great plan. Sometimes you gotta say the heck with it hand hunt your target buck right now especially if other hunters know he’s around. While you sit home and wait for the right wind and the stars to align, your buck leaves the area or somebody else spooks or kills him. Always be as scent free as possible and pay attention to the wind but use your gut!

It’s human nature to think that the bigger the farm or woods you hunt, the better your chances of killing big deer. Sometimes it’s just the oppo9site. When you hunt a public area or a private farm or wood of 200 to 2,000 acres, you’ll have to share the land with a few to an army of other hunters. People will roam and drive all over the place and hang treestands. To a mature buck, pressure changes everything, and it takes only a few days of that fracas for him to deep-dive for cover and go nocturnal.

Think about those small and likely unhunted woodlots and thickets near home that you drive past every day. If you can get sole permission to hunt 10 to 40 acres in just the right spot, you’ll be able to scout it and hunt it the way you want to, like Dieter Herbert does in the New York suburbs. I doubt you’ll shoot the next state record, but putting an arrow into a 130- to 150-inch buck is very doable.

Old-timers have preached it for years: “Them deer can see so good in the big moon, they stay up all night eating and don’t move a-tall in the day.” It’s bewildering to me that millions of hunters still think that way.

Numerous studies of whitetails have established historical rut curves that document one indisputable fact: In any year, from Virginia to Kansas to Canada, 90% of adult does will come into estrus and be bred from Nov. 5 to Nov. 20, regardless of moon phase.

I know — that the five or six days during and around the “rutting” moon in November can be a great time to hunt.

In a study conducted a few years ago at North Carolina State, researchers tracked GPS-collared deer throughout the four moon phases and analyzed text messages sent from the collars to determine when and how the animals moved. Summing up their findings, a scientist said, “A common misconception is that deer can see better at night because it’s brighter when the moon is full. But according to our data they actually move less on average at night during a full moon and more during the middle of the day, and also earlier in the evenings.”

At 25 feet or higher a buck will not see or smell you. But if you’re like me and most other people who are a little to very leery of heights, admit it, you’re uncomfortable climbing and posting that high on a small platform. Standing and drawing your bow is awkward to nerve-wracking. Plus, the higher you hunt, the narrower the target of a deer’s lung vitals, and the tougher the shot. I firmly believe that anywhere from 17 to 21 feet is the perfect height for a stand. High enough so that if you play the wind right, sit still and make all the right moves, a buck won’t bust you. Low enough that the stand feels solid, safe, and comfortable under your boots. When a buck comes in broadside within 40 yards, you have a killer sight picture and shooting angle to his vitals.

Sail an arrow over a deer’s back and it will flinch, jump, and run off a little way. But if the animal didn’t see or smell you, it didn’t know what happened. Maybe a stick cracked or a limb fell; deer hear those sounds all the time.

There are many stories of bowhunters missing a buck, only to have the animal settle down and circle back within range, only to get missed again or killed this time. Keep your wits, watch the jittery buck you just missed, and be ready. It’s a long shot, but a second shot can happen.

A doe or buck stamps its foot and head bobs when it sees a strange object it can’t make out, like you huddled on the ground or up in a treestand. It is nervous body language, yes, but it does not necessarily indicate quick flight. No need to take a quick and poor bow shot at a buck on high alert; he’ll duck the arrow and whirl for sure.

Instead, freeze and don’t move a muscle. Don’t make direct eye contact with a stamping, bobbing deer if it is super close (sounds strange, I know, but try it). More times than not, so long as a buck doesn’t smell you, it will settle down, lose interest, and start to walk off. Now you might have a better and easier shot at a calm deer.