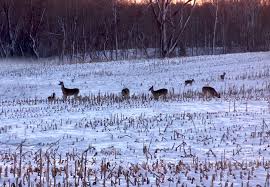 Indiana officials are looking for ways to encourage more women and youth to become game hunters as the state continues to issue a declining number of hunting licenses.

The state’s wildlife preservation programs rely on the sale of hunting licenses as a main source of funding, the Indianapolis Star reported . So Indiana’s decline in hunting over the past decade is threatening conservation efforts along with communities and businesses that profit from the sport.

The drop in participation is spurred by an older generation of residents who enjoy the sport phasing out, along with limited interest from younger generations who don’t have the same connection to hunting.

“Generations of Hoosiers are not experiencing outdoor activities as much anymore,” said John Goss, former director of the state’s Department of Natural Resources and the Indiana Wildlife Federation. “That changes who goes hunting, where and how often.”

But the trend isn’t unique to Indiana. Just 5 percent of Americans between ages 15 and 50 hunt, according to the latest Fish and Wildlife Service survey.

The Indiana Department of Natural Resources is hoping to increase interest by launching new programs to reach groups not typically associated with hunting. The department is pursuing a three-step approach to recruit, retain and reactivate hunters.

The department launched a program to teach students archery in schools. The agency also is hosting many women-only hunts or events at hunting ranges.

The Second Annual Dubois County Coyote Charity Hunt is coming up soon.  It’s hosted by Chris Popp, Bill Martin and Kevin Shepherd.  Sign up at the Great Outdoors from 6:30 PM to 7:30 PM on January 18.  Final check in is Sunday January 20 at 10:30 AM.  No later entries.  Half of the total pot will go to Charity and half to the winning teams.  Biggest and smallest dog side pot is $25 and they are optional.  Most dogs killed will earn you $25 for class 2 only.  Your team can be up to 3 hunters at $100 per team. For class listing and official rules visit the Great Outdoors in Jasper’s Southgate Center.

Patoka Lake Bow Hunters first shoot of 2019 will be Saturday and Sunday January 19th and 20th at Patoka Lake Archery Range near Wickliffe. This will be a "30" Target 3D shoot. Participants should use the main entrance to Patoka Lake off State Road 164. Registration on Sunday starts at Daylight till 12:00pm. Shooting fees are $8.00 for Active PLB members, $10.00 for Nonmembers and $5.00 for Youth (age 11-17) while Cubs (10& younger) and Active Military shoot for free. For more information, call 812 205-0081.

The Patoka Valley Limbhangers Chapter of the NWTF will hold their Hunting Heritage Banquet on Sat. Feb. 2 at Ferdinand Community Center.  Doors open at 4:30 and dinner will be at 6:30.  The Hunting Heritage Super Fund Banquets put dollars on the ground within the state and across the nation for upland habitat restoration, land acquisition, hunting and shooting education projects.  The banquet will consist of a buffet style dinner, raffles on quality firearms and other prizes, as well as a live and silent auction on exclusive NWTF merchandise, prints, knives and lots more.  Pre register by Jan. 27 for your chance to win a Yeti Cooler.  Indiana Gaming License #0039.  For more information contact Dave Jellison at 812-639-0208 or email [email protected].

The Outdoor Life3/Field & Stream Expo is coming to the Kentucky Exposition Center in Louisville Jan. 18-20.  Formerly named the Deer & turkey Expo, this event will feature top companies, gear, equipment and the latest products.  You can shop, meet and great with the most knowledgeable people in the industry.  There will be show deals, trophy contests, feature display, seminars, archery, shooting ranges, exhibits and lots more.  Tickets are $15 for adults for a one day pass and $5 for youth ages 6-15.  Tickets include a one year subscription to Field & Stream or Outdoor Life Magazines.  Excludes youth tickets.  Tickets available at www.fieldandstreamexpo.ticketspice.com/2019kentucky .

The 65th Annual Indianapolis Boat, Sport & Travel Show is coming to the Indianapolis State Fairgrounds Feb. 15-24.  On day tickets for adults are $13 EACH.  Children ages 6-12 are $9 each.  There will be over 12 acres of new boats and RV’s.  Shop for he latest and greatest tackle typically not found in the big box stores.  Vendors will also be there from all over North American to help you plan a getaway.  You can also lear to sharpen your fishing skills with seminars from industry experts and top pros.  Tickets available at renfro productions dot com.

The 22nd annual Indiana Deer, Turkey & Waterfowl Expo will be held Feb. 21-24 as part of the Boat Sport & Travel Show.  New this year is the Archery Alley.  Outfitters from all over the world will be there to help you book a trip and show off the latest gear.

The Rotary Club of Jasper has distributed nearly $5,000 in rebates for ATV safety equipment for children under 18 to help them comply with a new law that went into effect in July of 2017.  The club still has approximately $10,000 available to be claimed.  The Rotary Club will reimburse to anyone purchasing safety equipment up to $100.  There are three basic requirements that must be met to receive the rebate.  The child must complete an online safety course with the help of their parents at a cost of $30.  The Rotary Club will reimburse you for the cost of the course plus up to $100 for safety equipment.  The child and adult requesting the rebate must be a resident of the counties served by DNR District 7.  Those counties include Daviess, Dubois, Gibson, Knox, Martin, Pike, Posey, Spencer, Warrick and Vanderburgh.  Residents in Perry and Orange County are also eligible for the rebate as adjoining counties.  The safety equipment must be purchased from either AC Motorsports in St. Anthony, Hopf Outdoor Power in Jasper, A.J. Cycle & Trike Conversions in Jasper, Motorsports by Batteries Now or Obermeyer Honda, Yamaha & Suzuki in Jasper.  These dealers have the information as well.  The Rebate will be available until June 30, 2020 unless the funds are exhausted prior to that date.

During winter, coyotes grow thick fur coats to keep them comfortable in temperatures as low as 14 degrees Fahrenheit. This extra fur often gives them a larger appearance, leading people to believe they are bigger than they actually are. Coyotes normally weigh no more than 40 pounds. Young coyotes leave their families in early winter to look for new home ranges, which can lead to an increase in coyote sightings. Found throughout the state, coyotes are able to thrive in urban environments.

Coyotes are present in all sections of the state. There are records of coyotes in Indiana as early as 1816, though they likely inhabited Indiana well before that time. Bounties were in place in Indiana on coyotes from at least 1849 through the late 1960s. Despite this persecution by early European settlers, coyotes persisted in Indiana. Historically, coyote populations were limited in range to the prairie regions of the state, and expansion may have partially been limited because wolves suppress coyote populations, and both red and gray wolves were once abundant in Indiana. However, with the eradication of wolves and conversion of habitat to farmland, coyotes have been able to expand and adapt to new habitats. Statewide coyote abundance has slowly increased as coyotes continued to expand into previously unoccupied habitat. Today, coyotes occupy all of Indiana, no matter the habitat type or amount of development.

Landowners, or a person with written permission from a landowner, may take coyotes year-round on private property by trapping or shooting without a permit from the DNR. A landowner does not need a permit to take coyotes on his/her property by one of these methods, but a hunting or trapping license is required to hunt or trap coyotes on land other than your own. To get help with a nuisance coyote, contact a licensed wildlife control operator.