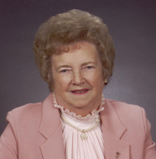 She was a member of St. Joseph's Catholic Church in Jasper, where she was a sacristan for many years, and was a member of their St. Ann's Society.  She was also a recipient of the Simon Brute' award.

She enjoyed being a grandmother and spending time with her family.

Preceding her in death besides her husband, was one daughter Patricia Hewitt, two sisters Cyrilla Miller and Cleo Mundy, and one brother, Gilbert Jochem.

A Mass of Christian Burial  for Rose Marie Brosmer will be at 11:00 a.m. on Tuesday, September 24, 2019 at St. Joseph Catholic Church in Jasper, with entombment to follow in Fairview Cemetery Mausoleum in Jasper.
A visitation will be held from 9:00 until the 11:00 a.m. service time at the church on Tuesday.
Memorial contributions may be made to  St. Joseph Catholic Church or a favorite charity.