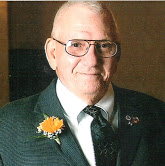 He was a graduate of Vincennes University.

He retired from Masterbrand Cabinets as a Quality Control Manager.

Bob was a member of St. Joseph Catholic Church in Jasper.He volunteered on the Spirit of Jasper Train and for the Jasper Mill.He was a past member of the Jasper Planning Commission and the Zoning Appeals Board.

Preceding him in death beside his wife were his parents and one brother, Bill Wright.

There will be no visitation, burial will be at a later date at Fairview Cemetery in Jasper.

Memorial contributions may be made to the Dubois County Humane Society.