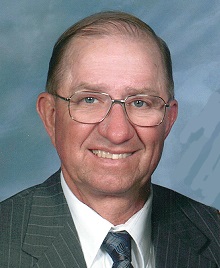 Luther was born in Boone Township, Indiana, on April 8, 1943, to Ralph and Hilda (Hoffman) Mann.   He married Lou Ella Kieffner on May 14, 1966, in St. Paul's Lutheran Church in Haysville, Indiana.

He was a 1961 graduate of Ireland High School.

He was a United State Veteran serving in the Army Reserves.

Luther was a lifetime farmer.

He was a member of Redeemer Lutheran Church in Jasper, Indiana, where he served on the church council and several committees, and the Young Farmers, where he previously received an award for outstanding farmer of the year.  He was previously on the advisory board for Boone Township and the Dubois County 4-H board.

He enjoyed fishing and was a student pilot, who loved flying.

Preceding him in death are one sister and brother-in-law, Wilma and Harold Eck, and one nephew, Steve Mann.

Funeral services for Luther R. Mann will be held at 11:00 a.m. on Monday, December 9, 2019, at Redeemer Lutheran Church in Jasper, Indiana, with burial to follow in St. John's Cemetery in Boone Township, IN.  Pastor Adam Ruschau will officiate.

Memorial contributions may be made to Redeemer Lutheran Church  or to a favorite charity.