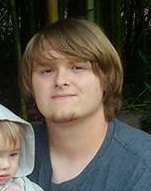 He was born October 18, 1996, in Huntingburg to Joshua Dewayne Kendall and Sarah Leann Goldman.  Isaac attended Southridge and Pike Central High Schools; was a restaurant worker; and enjoyed music, writing, camping, traveling, skate boarding and being with his family.  He was preceded in death by his mother and father; and grandmother, Rosemary Runyon.

Funeral services for Isaac Joshua Kendall Goldman will be held at 4:00 p.m., on Saturday, February 9, 2019, at the Nass & Son Funeral Home in Huntingburg.  Friends may call for visitation at the Nass & Son Funeral Home from 2:00-4:00 p.m., on Saturday, the day of the service.  Memorial contributions can be made to the Isaac Goldman/Delora McCrackin Funeral Expense Fund c/o Fifth Third Bank in Jasper.