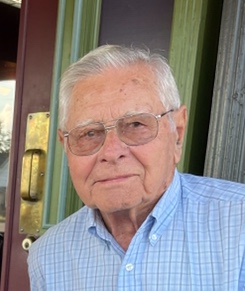 Herman was born in Ireland, Indiana, on March 20, 1931, to Edward and Helen (Renner) Wehr.  He married Dolores Hasenour on October 6, 1953 at St. Anthony Catholic Church in St. Anthony.  Following the passing of Dolores, he married Helen Byrne at St. Bernard Catholic Church in Rockport, Indiana where he resided until her passing.

Herman was a US Army Veteran, serving in the Korean War.  Following his return home, he worked in the construction industry in Jasper and Evansville until his retirement in 1995.

Herman enjoyed fishing with close friends and family, and bird and deer hunting with his brother, son, and grandson

A Mass of Christian burial for Herman will be held at 11:00 AM on Wednesday, November 23, 2022 at St. Mary Catholic Church in Ireland, Indiana, with burial to follow in the church cemetery.  The VFW Post #673 will conduct military graveside rites.

A visitation will be held prior to the Mass from 9:00 AM until 11:00 AM at St. Mary Catholic Church in Ireland.

Online condolences can be made at www.becherkluesner.com