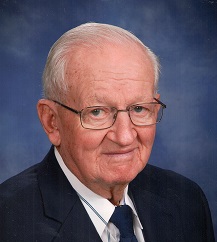 George E. Eckerle, age 88, of Jasper, Indiana, passed away at 2:04 p.m. on Tuesday, August 25, 2020, at home.
George was born in Jasper, Indiana, on November 22, 1931, to Robert and Elizabeth (Lechner) Eckerle.  He married Marian Prechtel on January 8, 1955, in St. Joseph's Catholic Church in Jasper, Indiana.  She preceded him in death on July 12, 2000. George was a United States Army Veteran. He had a very good work ethic.  He worked in the family business, Eckerle Construction, St. Joseph's Catholic Church in Jasper, and then retired at the age of 81 from German American Bank. He was a member of St. Joseph's Catholic Church in Jasper, Indiana, American Legion Post #147, and Jasper Outdoor Recreation.  He was also a recipient of the Simon Brute Award for service in the Catholic church.
Surviving are three daughters, Jane (Gene) Hochgesang, Jasper, IN, Sharon (Fred) Schnell, and Karen (Rick) Hauser, both of Schnellville, IN, one son-in-law, Steve (Sandy) Schnaus, Jasper, IN, six grandchildren, Ryan (Julie) Schnell, Jill (Scott) Robisch, Cale (Rachael) Schnaus, Nathan (Sarah) Hochgesang, Amy Kettler, 14 great grandchildren, two brothers, Leo Eckerle and Donald (Margaret) Eckerle, both of Jasper, IN, companion, Norberta Bullock, Jasper, IN, and many nieces and nephews. Preceding him in death besides his wife, are one daughter, Geraldine "Gerri" Schnaus, two sisters, Georgina Detroy and Genevieve Frick, and five brothers, Sylvester, Linus, Roman, Joe, and Edwin Eckerle.
A Mass of Christian Burial for George E. Eckerle will be held at 10:00 a.m. on Monday, August 31, 2020, in St. Joseph's Catholic Church in Jasper, Indiana, with burial to follow in Fairview Cemetery in Jasper, Indiana.  The American Legion Post #147 will conduct military grave site rights. A visitation will be held from  1:00-5:00 p.m. on Sunday, August, 30, 2020, at the Becher-Kluesner Downtown Chapel in Jasper, Indiana and one hour before services from 9:00-10:00 a.m. at the church on Monday.  Covid-19 safety protocols will be mandatory for all family and friends in attendance - these include the use of face masks, observation of social distancing, and the use of hand sanitizer upon entering and exiting the facilities.  The family greatly appreciates everyone's cooperation. Memorial contributions may be made St. Joseph's Catholic Church, American Heart Association, American Parkinson's Association, Heart-to-Heart Hospice, or to a favorite charity.