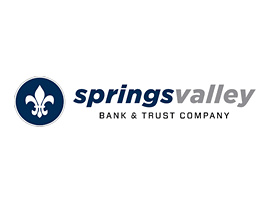 Local Sources- Harriett Brown, past president of Springs Valley Bank & Trust, Jasper, was posthumously honored by the Indiana Bankers Association with the IBA Leaders in Banking Excellence Award, presented on August 5th, at a special ceremony in Indianapolis. This prestigious award celebrates exceptional leaders who have made a positive impact on Indiana banks and communities.

Brown began her 63-year banking career in 1926 at West Baden National Bank in West Baden Springs, joining the board of directors in 1949. She was named president of Springs Valley in 1971, distinguishing her as one of the first female bank presidents in Indiana.

"I had the pleasure of working with Harriett Brown for two years before her retirement," stated Angie Jones, former Retail Deposit Manager with Springs Valley, "She was a very special lady at the Bank and highly respected in our community."

James C. Tucker, who serves on the Springs Valley's Board of Directors, knew Harriett and shared his recollections: "It was my pleasure as a young lawyer respresenting Springs Valley Bank to have many occasions to work with Harriett Brown, then-president of the Bank. We became friends and that friendship lasted until her death in 2004 at age 98. She and Arnold Habig (founder of Springs Valley) were a wonderful team in advancing the Bank in its early years. Harriett Brown had charisma and high intellect which aided her in her rise to election as the president of the Bank in a male-dominated field."

Four other members of the Indiana banking community were inducted into the class of 2022 leaders by IBA.