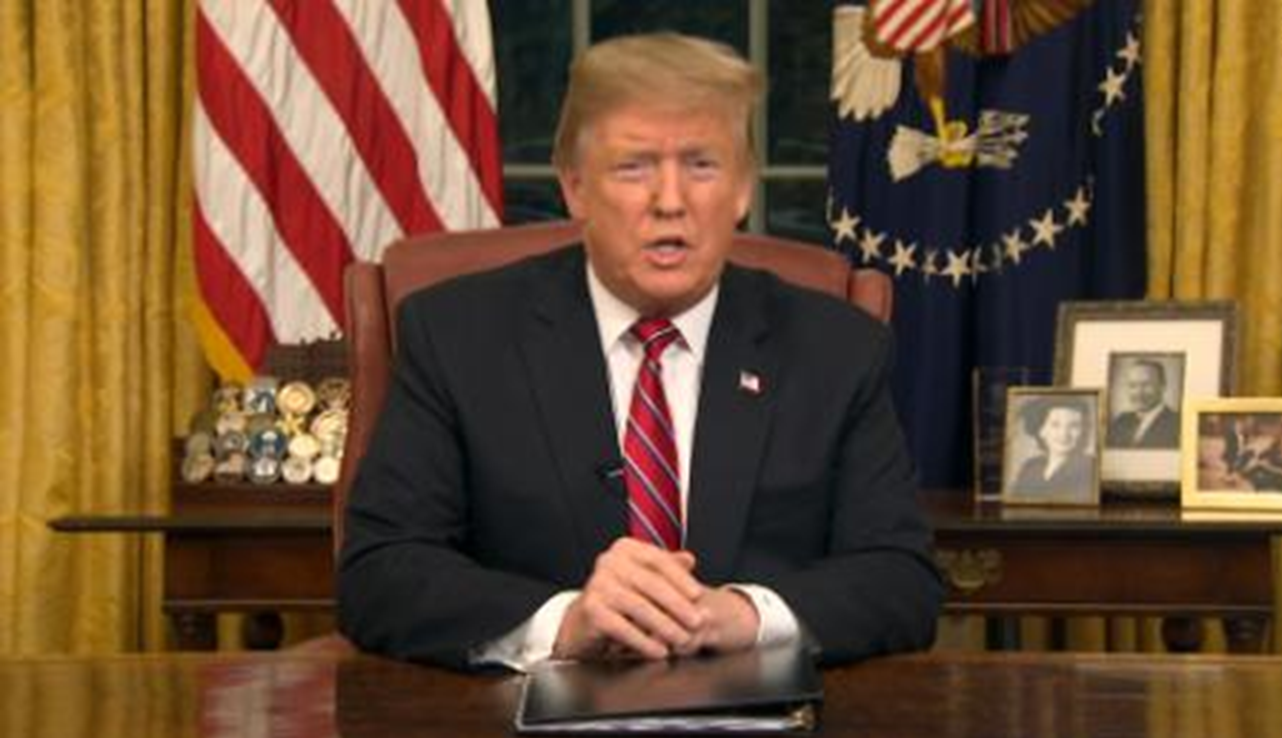 WASHINGTON, D.C.--Pres. Donald Trump laid out a plan for border security Tuesday night in a speech to the country on national TV and radio.

Trump called on Democrats in Congress to fund border security, citing statistics on illegal immigration, drugs coming across the border and gang violence originating on the other side of the southern border.

“The criminals and drugs that are flowing across our southern border and into America have a devastating effect on our communities. Last year, 1.7 million pounds of narcotics entered through our southern border, and each day more than 100 Americans are killed in drug related overdoses,” said Rep. Dr. Larry Bucshon, reacting to Trump’s speech.

“Americans on Main Street understand this crisis and its impacts on their communities – even those far away from the border – and they want their elected officials to solve it. That is why we must provide the resources necessary to secure our southern border with physical barriers, improved technology, and well qualified personnel. We also need to fix our nation’s broken legal immigration system. The American people voted for a divided government, not a government that is unwilling to work together to ensure our national security. I urge my Democrat colleagues in the House and the Senate to put their constituents’ needs before their own political aspirations and come to the table to work with President Trump and Republicans in Congress to secure our nation,” said Bucshon.

"Tonight, in no uncertain terms, President Trump described a situation on our southern border that should trouble every American heart. Not only is there a glaring national security threat which terrorists seek to exploit, but a humanitarian crisis that demands attention. America is a Nation of immigrants, and we are no doubt strengthened by our diversity. However, our porous border has put our country, and many who seek a better life here, in a dangerous situation that we cannot allow to continue. Whether it is sex trafficking, the drug trade, or coyotes who place vulnerable people in potentially deadly situations, it is time for us to get serious about border security and stop kicking the can down the road. We must act now, and I stand with the President in his call for a border wall where it is practical and additional security measures elsewhere. It’s time for Democrats to put aside petty politics and come to the negotiating table to help do what is right to create a more secure and prosperous country."

"Tonight President Trump stoked fear while Speaker Pelosi & Senator Schumer laid out the facts. The President manufactured a crisis at the border, and now 800,000 Americans are also facing a crisis due to Trump’s shutdown. We need to fund our government so we can provide critical health and safety services. Only then can we tackle comprehensive immigration reform."

Today marks the 19th day of the partial government shutdown.