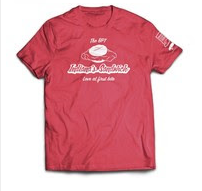 October is pork month in Indiana. What better way to celebrate than by ordering Indiana's unofficial sandwich since 1908, the pork tenderloin?

But pork production in the state, Crouch says, is no joke.

"Porktober is a way to celebrate [being] the fourth-largest producer of pork, and exporter of pork, within the country," Crouch said. "So we celebrate pork in a big, big way."

Statewide, 60 restaurants are participating in the Tenderloin Lover's Trail. Hoosiers are being encouraged to stop by locations, enjoy a breaded pork tenderloin and vote for their favorites online at visitindiana.com/cuisine.

In WITZ's listening area, four restaurants will be participating this year. Snap's, the Schnitzelbank, and Mill House in Jasper are members - The Post in Tell City will also participate.

Anyone who checks into any five participating restaurants can win a BPT (Breaded Pork Tenderloin) shirt, courtesy of Indiana Pork.