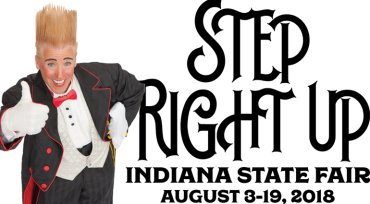 INDIANAPOLIS -- Since 2006, the State Fair has picked a different agricultural theme each year. This year, it's highlighting a new attraction instead.

The fair's official theme is "Step Right Up" -- to the circus. The fair has organized what it's calling the "Big Top Circus," with three free shows a day for the fair's 17-day run.

Spokeswoman Sharon Smith says there will be no animal acts -- they'll leave that to the livestock barns and a new interactive "Animal Town" exhibit. But the fair has hired trapeze artists, acrobats, and as the headliner, self-described "comic daredevil" Bello, who's drawn attention for stunts including rappelling off Madison Square Garden and performing a high-wire walk across the length of a cruise ship at sea.

Smith says the branding will help the fair promote what organizers hope will become an annual feature. She notes circuses have a long Hoosier history -- Peru was the winter headquarters of several traveling circuses until the 1940s, with troupes using that home base to perform across the state. Peru still proclaims itself the "Circus Capital of the World," and is home to an amateur circus and Circus Hall of Fame.