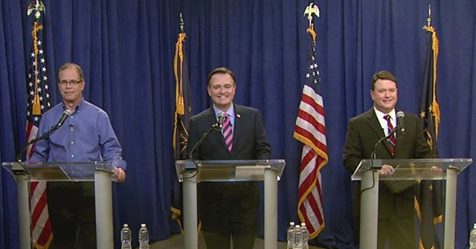 INDIANAPOLIS -- Three Republican hopefuls for the U.S. Senate seat out of Indiana squared off at a live televised debate Sunday evening, this as the May 8th Primary draws closer.

Jasper Businessman Mike Braun, U.S. Rep. Luke Messer and Congressman Todd Rokita met for a one-hour debate at the WISH-TV studio in Indianapolis.Each made their cases for why they're the best candidate ahead of the May primary.

Braun, Messer and Rokita all sent statements following last night’s debate declaring victory, while others say a clear winner is hard to come by.

Local candidate Mike Braun spent much of the debate explaining why HE should win the republican nomination over Messmer and Rokita… both of whom currently serve in Congress.

"President Trump was right," Braun said. "We do not need more career politicians in Washington. We need guys like me that have lived it in the real world."

Luke Messer says, he’s been open during this campaign, and he says that’s what sets him apart.

"If there is one thing that you remember about me tonight, I would want it to be this: that I am who I say I am," Messer said.

Todd Rokita says your decision May 8th all comes down to trust.

"It comes down to who are you going to trust," Rokita said. "I don't think you can trust these guys."

Mike Bruan, Todd Rokita and Luke Messer are all running on the republican ticket in the May 8th Primary for the U.S. Senate seat out of Indiana.

The winner of that contest will go on to face democratic incumbent Joe Donnelley in this fall’s midterm election.