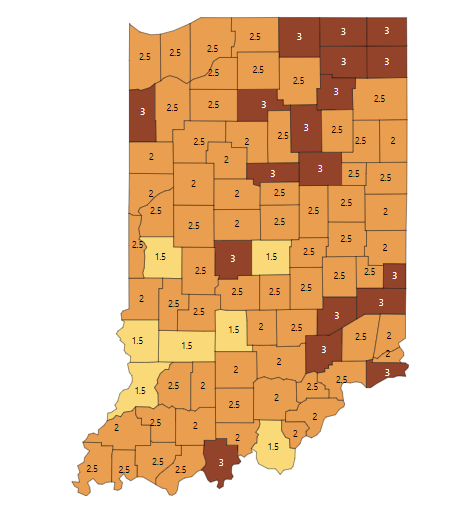 Wednesday's update saw Dubois County record 27 new positive COVID-19 cases and no new deaths attributed to the disease. Dubois County has reported 68 new cases in the past two days. Over the course of the pandemic, the county has seen 8,778 total cases and 139 deaths.

Dubois County has returned to an Orange Advisory. The increased advisory level was pushed by the cases-per-100,000 residents metric reaching higher than 200. The positivity percentage of cases within the county is still less than 10%.

In the advisory update, statewide, 18 counties are now under a Red Advisory - including Perry in Southwestern Indiana. An addition seven counties have been added to the list since last week. 67 counties are under and Orange advisory; 7 are Yellow. No counties are currently under Blue, the lowest advisory.

Across the state, 6,164 Hoosiers tested positive for COVID-19 in Wednesday's report, along with 63 deaths. Wednesday's report of 6,164 new cases is the highest recorded day since Indiana reported 7,251 total cases on January 6, 2021.