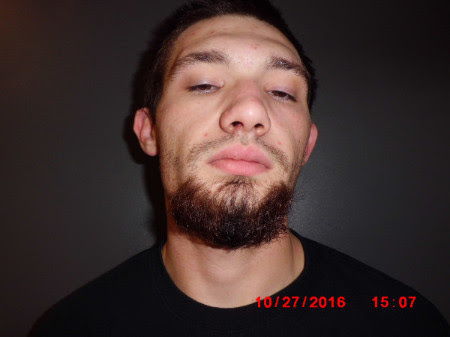 ROCKPORT -- Bradley D. Vanhorn, 21, of Grandview was sentenced on Friday, May 4 in the Spencer Circuit Court after entering a guilty plea on January 5 to Burglary, a Level 4 Felony.   The charges stemmed from a reported house fire and burglary near Grandview in October 2016.

In the early morning hours of October 1, 2016, the Spencer County Sheriff's Department received a report of a house fire near Grandview.

Spencer County Sheriff's Deputy Marvin Heilman made contact with the person making the report who said she heard a man yelling and saw him coming towards her.  She was able to provide a description of the man and stated he asked her to jump start his vehicle, but did not see a car nearby.  She said she told the man that the police and fire departments were on their way and he then then ran out of view.  A blue Volkswagen Beetle was found parked behind a garage at the scene which was towed.

The next day, employees of the wrecker service discovered a man in the back of the vehicle under a pile of clothes later identified as Vanhorn.  Following an investigation, it was determined that the home, belonging to the late Mary Litkenhus who was living in a nursing facility at the time, had been burglarized and likely intentionally set on fire.

The Sandages entered guilty pleas to felony assisting a criminal charges earlier this year and were sentenced with a requirement that they cooperate against Bowman and Vanhorn.

Subsequent interviews of witnesses and those involved indicated that Vanhorn and Bowman may have discussed setting the residence on fire in order to mask evidence of the burglary.

Level 4 felonies carry a sentencing range of 2-12 years.  Under the agreement, Vanhorn's sentence was to be determined by the Court with an agreed total sentencing range of 4-12 years with the executed portion of the sentence ranging from 2-8 years.  Following a pre-sentence investigation, Spencer Circuit Court Judge, Jon Dartt, conducted a sentencing hearing on May 4 at which Spencer County Prosecuting Attorney, Dan Wilkinson, argued for the maximum sentence allowed under the plea agreement, 12 years with 8 years executed.

Vanhorn received the total maximum sentence of 12 years with 6 years executed at the Indiana Department of Correction 6 years suspended to probation.  Under Indiana law, Vanhorn must serve 75% of the executed portion of the sentence.  The Court also ordered Vanhorn to repay $2,000.00 in restitution to the family members of the victim.

Justin Bowman entered a guilty plea to burglary as a Level 4 Felony on March 2and is set for a sentencing hearing on June 29 in the Spencer Circuit Court at2:30 P.M.  Under the terms of her plea agreement, the sentence will be at the discretion of the Court with the same sentencing ranges as Vanhorn.