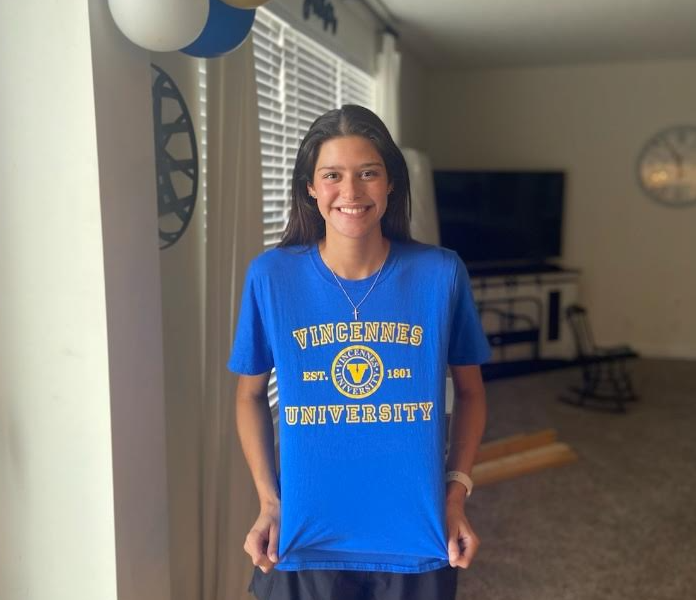 Vincennes – The 2021 Region 24 Champion Vincennes University Trailblazer volleyball team picked up a unique signing with the addition of outside hitter Audrey Buis.

Buis comes to Vincennes after being homeschooled while playing for the Indy Genesis of the National Association of Christian Athletes (NACA) in Greenwood, Ind. The senior also played for one of the largest club programs in the state of Indiana, The Academy Volleyball Club, during her senior season and was named to the Junior Volleyball Association (JVA) Watch List.

Buis is a six-foot tall hitter from Franklin, Ind., who helped guide the Genesis to a 31-7 record this past season and the 2021 NACA Division II National Championship.

“While Audrey doesn’t have experience traditionally at the high school level, she does have experience playing with Indy Genesis and playing for The Academy,” VUVB Head Coach Gary Sien said. “When we watched some film of Audrey playing for Genesis, she really stood out and one of the things that is impressive about Audrey is that she tried out for one of the largest club teams in Indiana, The Academy and made their No. 1 team.”

“For someone to come in before her senior year and make their No. 1 team, that never happens,” Sien added. “She was playing on that team with four NCAA Division I and two Division II players and was getting on the court. That really made her stand out to us, that she was able to do that.”

“It is going to be really neat to work with Audrey, because she is coming in as almost a blank canvas,” Sien said. “She is someone that I really look forward to working with because she hasn’t had much high-level training. She is probably going to need a little bit of time to catch up to some of our other players but we feel that Audrey’s potential is extremely high. She has everything that we are looking for in an athlete, her lack of experience is really the only thing that is separating her.”

“Audrey represents the best parts of growing through athletics,” Indy Genesis Head Coach Dalton Cox said. “Her drive for greatness on the court is matched by her desire to develop as an individual who understands leadership, embraces hard work, implements planning and strategy into her approach and consistently looks for and executes on opportunities to show up for her teammates.”

“Audrey’s obvious court skill draws attention from many, but it is her commitment and growth to servant leadership that will continue to be the most defining thing she brought to our team and program,” Cox added. “From the athlete who set every single-season and all-time record for her position, that means a lot. Vincennes is bringing on an impact player and person and I can’t wait to see her embrace this next opportunity.”

Audrey is the daughter of Matt and Cari Buis and is still undecided about what her major will be a Vincennes University.

“If everybody does their job, this could be a very good freshman class,” Sien said. “Even if everybody only reaches part of their potential this is still a very strong recruiting class. We have a good amount of experience and leadership coming back, so that is a good group to build on.”

“I know the games aren’t played on paper, but just looking at it, we are potentially pretty strong at every position heading into this season,” Sien added. “If everybody does their job and we reach our potential, really our toughest opponent will be ourselves.”

“We expect Audrey to contribute this season,” Sien said. “We don’t bring anybody on board unless we feel like they can contribute. She seems like a very mature and coachable person. She is my first homeschool athlete, so that will be something new for me as well. She has had a different learning experience through school and we will see what we can do to help bring everything out of her to help her be the best student and best athlete she can be.”

The Vincennes University Athletic Department is excited to welcome Audrey Buis to the 2022 recruiting class.