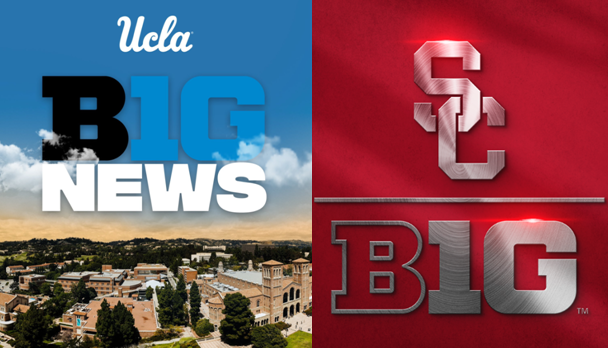 By Kris Norton
Rosemont, Illinois - The Big Ten will increase to a Big "Sixteen" as the conference announced the addition of UCLA and USC on Thursday.

The University of California - Los Angeles and University of Southern California are the newest additions for the Big Ten, in a conference and league becoming less defined by geographical boundaries.

Big Ten presidents and chancellors voted unanimously to welcome in the Bruins and Trojans.

In a statement published Thursday evening on behalf of the Big Ten, Big Ten Commissioner Kevin Warren said that the addition of UCLA and USC is in the best interest of the conference amid a changing national landscape.

According to a statement from USC Athletic Director Mike Bohn, the feeling of security in the alliance is mutual.

The pair of teams bring a high-level pedigree to both the basketball court and the football field.

Indiana's John Wooden led the UCLA Bruins to 10 of their 11 NCAA basketball championships, including a stretch of seven straight from 1967 to 1973. The Bruins' 11 NCAA championships are the most in college basketball history.

The USC Trojans claim 11 NCAA football championships, none coming after 2004.

Expansion and realignment has long been a topic of conversation across the NCAA football landscape, with talks recently renewed as the University of Oklahoma and the University of Texas are set to bolt from the Big XII in favor of the SEC.

Expansion is nothing new for the Big Ten. The conference has not been a true ten-team league since 1990, when the group of ten expanded to include Penn State. Three more teams have joined the ranks in the past eleven years: Nebraska in 2011, and Rutgers and Maryland making the move in 2014.

*Note: The images in the headline picture were posted Thursday by @USC_Athletics and @UCLAAthletics via Twitter.