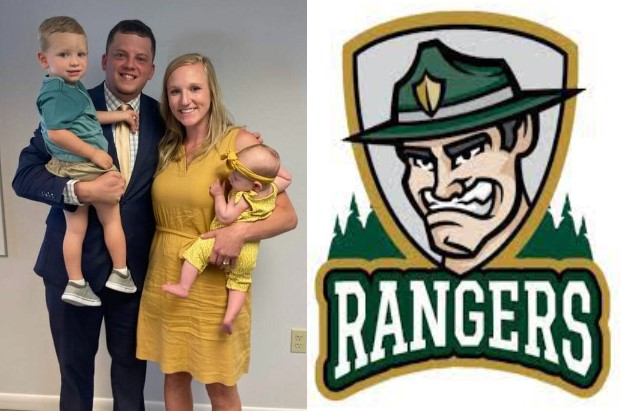 With the announcement during the IHSAA moratorium week, Coach Riggs says he's been caught up to speed by former Ranger Head Coach Ross Fuhs and is ready to hit the ground running.

"Coach Fuhs and I have talked just a tad bit," Riggs said. "In speaking with the other coaches, the kids are excited. It's a little bit of a time crunch but I do know they're excited, the coaching staff - we may have to fill one or two holes as we go along here in the next week or so - but they're excited, they're on board."

"Everybody's chomping at the bit," Riggs added. "We're having staff meetings this weekend and hash things out before we get rolling on Monday with the kids.

Forest Park Junior/Senior High School Athletic Director Doug Louden says that the though the district was working with a short timeframe to make a hire, they did not want to rush to fill the spot. Louden says that it did end up being a quick hire as Riggs stood out to the hiring committee.

Among the qualities that jumped out to Louden and school officials: Riggs' knowledge of the game, enthusiasm, and the ability to build an advanced weight training program.

"His knowledge of the game, the opportunity to give us advanced P.E., lifting weights," Louden said. "We all know that Forest Park, it's a young program, 15 years, but to get that weight room commitment and get these guys in there to get stronger really stood out big to us."

Riggs comes to Forest Park after a series of high school and college stops, most recently as an assistant coach under Malin Webb at Tell City. Growing up in South Bend, the Riggs moved to Southern Indiana to be closer to where his wife, Haley, grew up and attended Heritage Hills. Terry and Haley have two children under the age of three - son Tyce and daughter Teagan.

While Terry was adding responsibilities at Tell City prior to leaving, Riggs leaves with fond memories and another game to circle on the schedule.

"Coach [Malin] Webb and I had talked and he brought me on," Riggs said. "I coached defensive backs and this year I was moving towards offensive side of the ball. Both of them [Coach Webb's] have done a great job, and I think Coach Malin Webb has done a great job and keep building off of what has already been built."

"It was a great time, I really appreciate them, and I look forward to week three," Riggs added.

Riggs initially got into coaching during his time at Holy Cross College and would go on to man the sidelines at Franklin College for two years.

In 2019, Riggs was on the coaching staff at Decatur Central in 5A Central Indiana football.

He would then accept the head position at Elwood High School. Prior to a 1-8 season at Elwood with Riggs at the helm in 2020, the Panthers suffered consecutive 0-10 campaigns, and 21 straight losses under the previous staff.

Jumping back into a head coaching role at Forest Park, Riggs says he works off of a philosophy of three pillars: Football, Education, and Community. The first two pillars, football and education, are self-explanatory. The 'Community' factor will see the student-athletes active and volunteering in the Ferdinand community.

Forest Park A.D. Doug Louden shares what he expects to see on the field this fall.

"They're going to play hard..." Louden said. "He knows a little bit about the program and what we have coming back. Once he gets in there and figures out what kind of team we have, then he will adjust his style to that."

Riggs and the Ranger coaching staff will have just a matter of weeks to prepare for the annual scrimmage against Paoli. Riggs will hold a Green versus Gold scrimmage prior to week one.