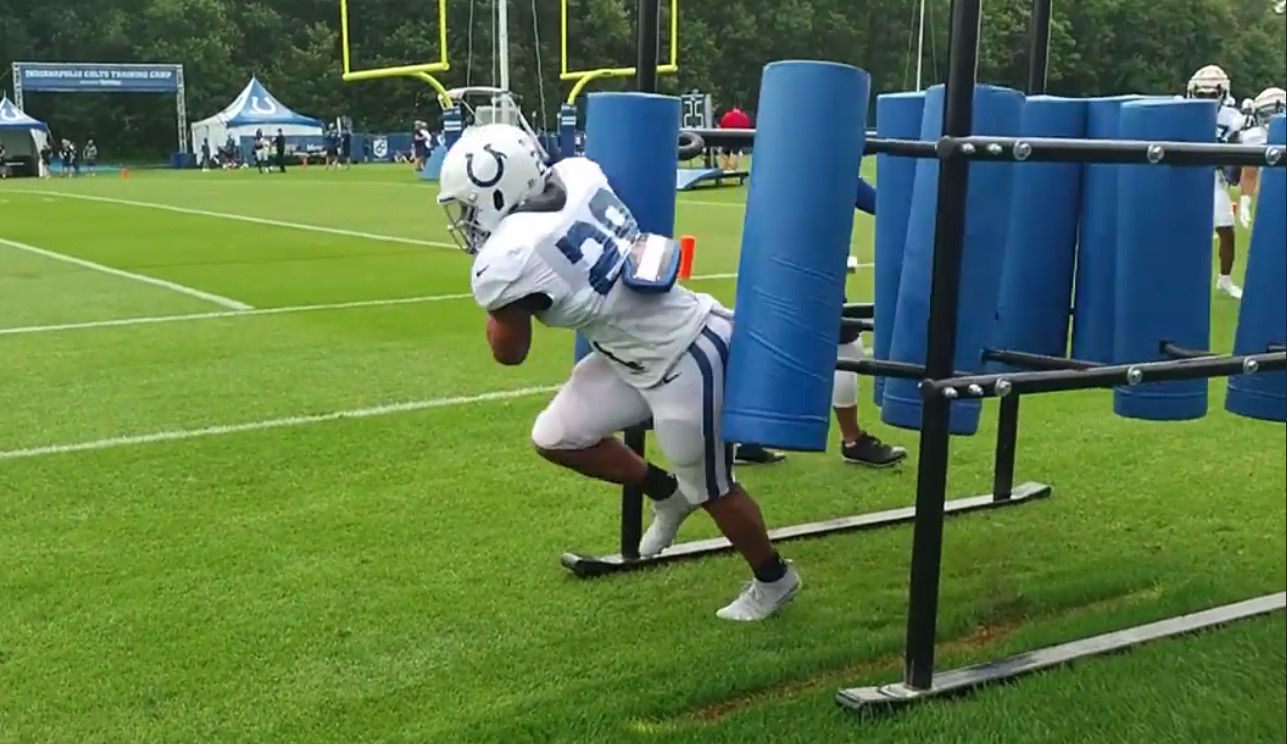 Westfield, IN - After opening the 2022 Training Camp period last week, the Indianapolis Colts donned pads on Tuesday and Wednesday at Grand Park in Westfield.

New player additions and equipment were on display. 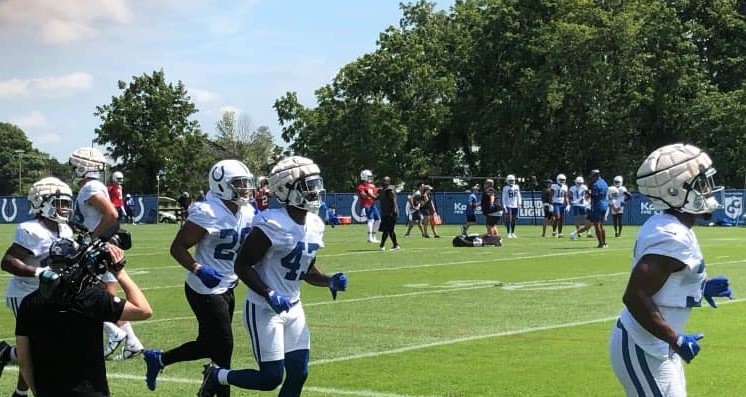 For the first year, the Colts are utilizing Guardian Caps to cut down on concussion risks.

Likely, the most prominent addition, veteran Quarterback Matt Ryan. The former number-three overall draft pick in 2008, four-time Pro-Bowler, and former All-Pro player has entered his first training camp with the blue and white. Going through offseason drills is one thing, Ryan says, but putting the pads on for full-speed action is another.

"It's always different, the intensity, how things move around you when there's actual contact," Ryan said. "The work we've done up until this point [Tuesday], is really important, but it changes." 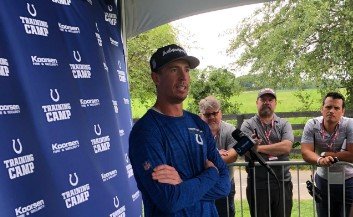 "You've got to take a deep breath, relax and go play," Ryan added.

In his 14 seasons with the Atlanta Falcons, Ryan was used to change in the offseason. But, changing organizations for the first time in his professional career is a whole new ballgame.

"The number of new players you're having to adjust to, every year there's that, but the magnitude of it, coming into a new organization, it's everyone..." Ryan said. "It's one thing to feel it out there, it's another thing to go and confirm either what you thought or maybe correct it. What you thought you saw is maybe not it."

Ryan's point of emphasis has been on the small things - adjusting footwork, timing in the passing game, and splits between wide receivers.

"It's watching that every day and hammering that out every day - and trying to match that intensity with the playbook," Ryan said. 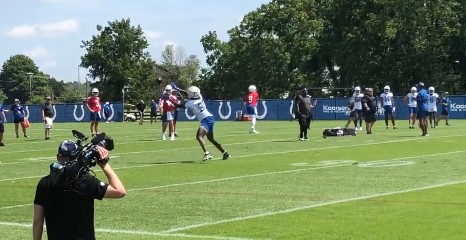 Some of the faces Ryan will throw to in 2022 won't just be new to him, but to the fan base. The Colts' third-round draft pick Jelani Woods, standing at 6'7", forms a formidable duo in the tight end room with 6'5" Mo Alie-Cox. Kyle Granson will factor into game action as well - including from the wingback position, as was on display Wednesday. Granson took a Nick Foles handoff for a touchdown in 11-on-11 drills.

Fellow 2022-draftee Cincinnati Wide Receiver Alec Pierce has seen increased looks with the starting unit - meaning one-on-one attention from former Defensive Player of the Year Stephon Gilmore. Gilmore, also a first-year Colt, has shadowed Pierce and keyed the rookie in on what veteran defensive backs are looking for, Pierce says. 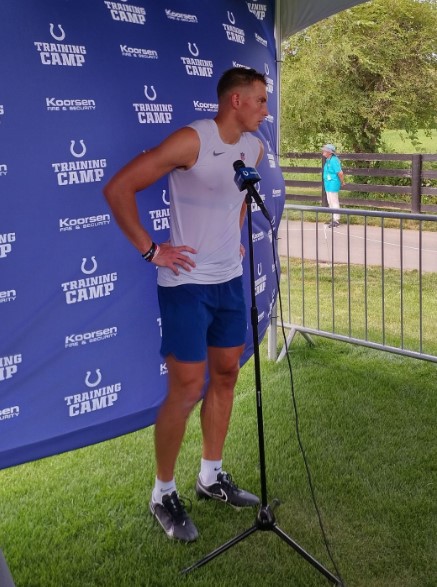 "A lot of times, he knows the route I'm running before I run the route, just off of my splits, how I'm extending, and stuff like that," Pierce said. "That's why I'm always trying to pick his brain, see what he's seeing. But, yeah, it's wild - it's really crazy to see how smart he is as a player."

Another rookie in play at a major position - Central Michigan Left Tackle Bernard Raimann. Originally from Austria, Raimann began his American football journey through an exchange program while staying with a host family in Michigan. The third rounder, who began his college career as a tight end, has had a steady dose of Pro-Bowl pass rusher Yannick Ngakoue. Though, Raimann says, he's taking each rep in stride and learning as much as he can from the Colts' new weapon at defensive end.

Raimann cracking a smile when asked if "it gets this hot in Austria".

"It's a huge honor to go against one of the elite pass rushers in the league and getting to compete against him every single day is incredible," Raimann said. "Sometimes he gets the best of us, but, that just makes us better as pass protectors and it's going to get us ready for the season."

"He's very versatile - from an outside speed rush, inside spin or speed-to-power move, he's got everything in his pocket," Raimann added.

Raimann is currently in a battle with veteran Matt Pryor for the starting left tackle role.

Though, the Austrian isn't the only international individual on the Colts' roster. Through the National Football League's International Pathways Program, Cornerback Marcel Dabo, hailing from Reightlinger, Germany, finds himself on the training camp roster. Dabo ended his rotation reps on Tuesday with an endzone interception of former Texas Longhorn Quarterback Sam Ehlinger.

By putting on the pads and inviting contact for the first time of the offseason, that can lead to physicality and the occasional altercation.

Wide Receiver Michael Pittman Jr. and veteran Defensive Back Rodney McLeod got into it on Wednesday. Shoves were traded; a Pittman punch did not land. The two had to be physically separated by teammates, though neither was removed from practice.

Colts Head Coach Frank Reich spoke on the matter after practice on Wednesday. 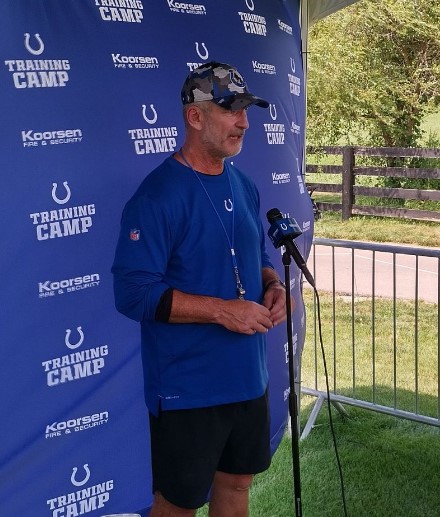 "We definitely encourage playing with an edge, you know, and that's what makes Pitt [Michael Pittman Jr.], Pitt," Reich said. "But, we don't want to cross that line, especially, with our own teammates."

In other wide receiver news, back with the Colts in a contract year, former Ohio State wideout Parris Campbell is hoping to stay healthy and build on a strong training camp thus far. Campbell, practicing with the first team, was able to get open on multiple occasions on both days. 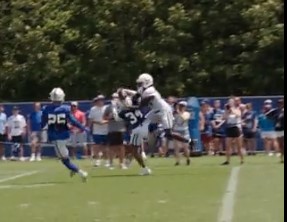 Dulin reels in a Foles pass (courtesy of @Colts on Twitter)

For those who are looking to attend training camp practices, admission is free. Grand Park hosts a Kids Fun Zone and plenty of opportunities to get up close to your favorite players. 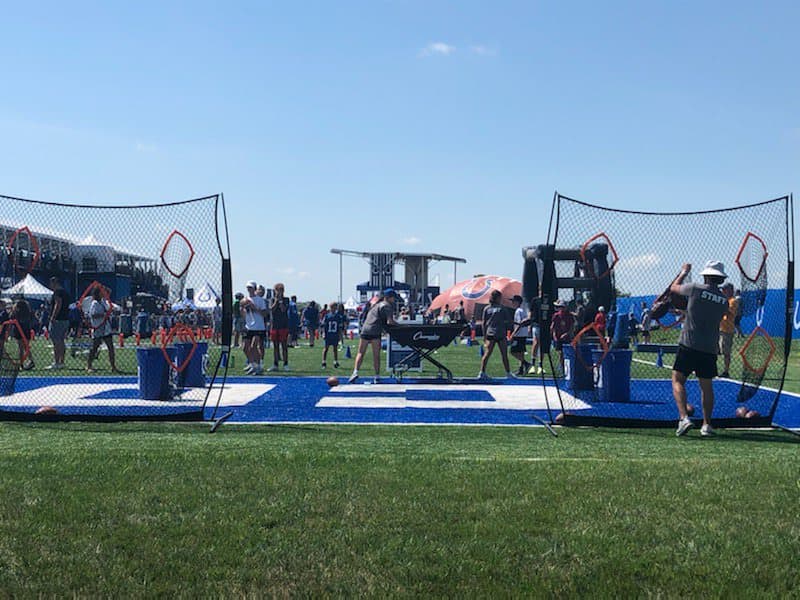 The full schedule, and to reserve tickets, view the Colts Training Camp website.