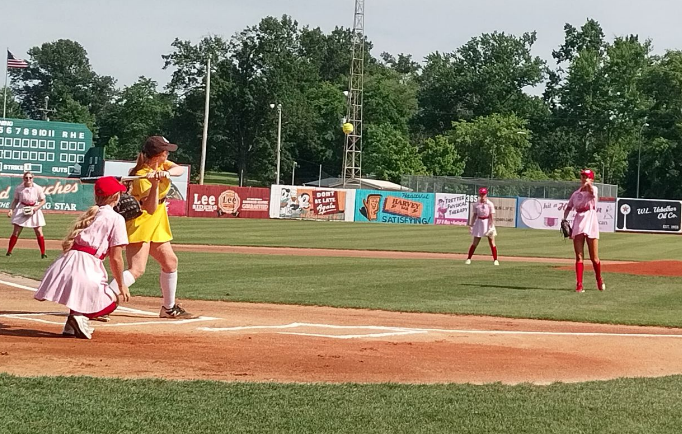 Huntingburg - In the 30th Anniversary celebration of 'A League of Their Own', the Racine Belles topped the Rockford Peaches in the Dirt in the Skirt match-up at League Stadium.
At its peak a crowd of 1,536, not including fans aged six and under, cheered on the Peaches and Belles on Saturday night. Both squads were made up of former and current area high school and college softball standouts. 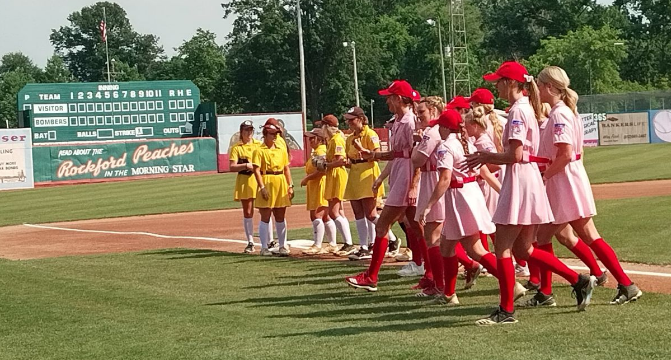 Rockford Peaches (pink) and Racine Belles (yellow) are introduced before the crowd.

The League Stadium gates opened early, at 4:45 p.m., for the 5:15 p.m. game. In five innings of play, the Racine Belles topped the Rockford Peaches in a defensive battle by the final score of 1-0.
In such a historic venue, it was an honor to take the field in the Dirt in a Skirt game as a Belle, says former Southridge Raider Jaelyn Walker.
"It's really cool to see and play in the League Stadium," Walker said. "You see all the people who've played here, the Bombers, the Southridge Raiders - who are also very good at baseball - Colson Montgomery, Camden Gasser, who I graduated with. It's just really cool and it's an honor to play here." 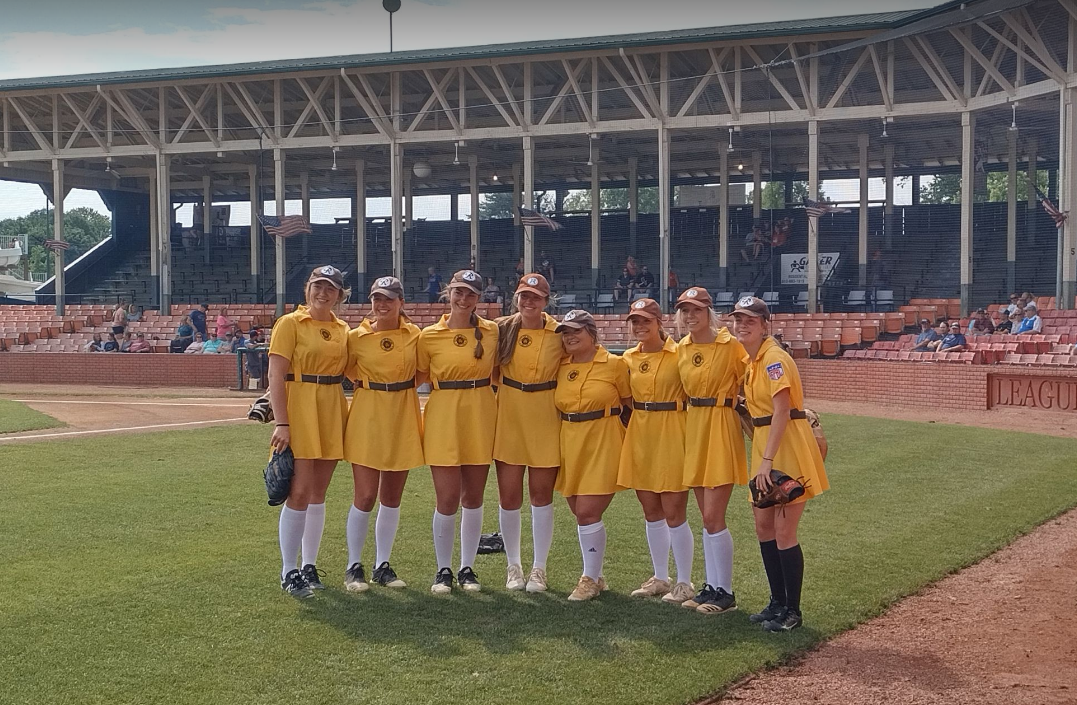 The Belles, 1-0 winners, pose for a group picture.

It was a homecoming of sorts for several former area standouts. Holland native Kendyl McKeough, having just wrapped up her collegiate softball career at Northern Kentucky University, traded in her jersey for Peach pink on Saturday.
While, McKeough says, the past has been all about competition, Saturday night was all about fun.
"I think that collegiate competitor, she's ready to be put away," McKeough said. "So, it's all about fun tonight." 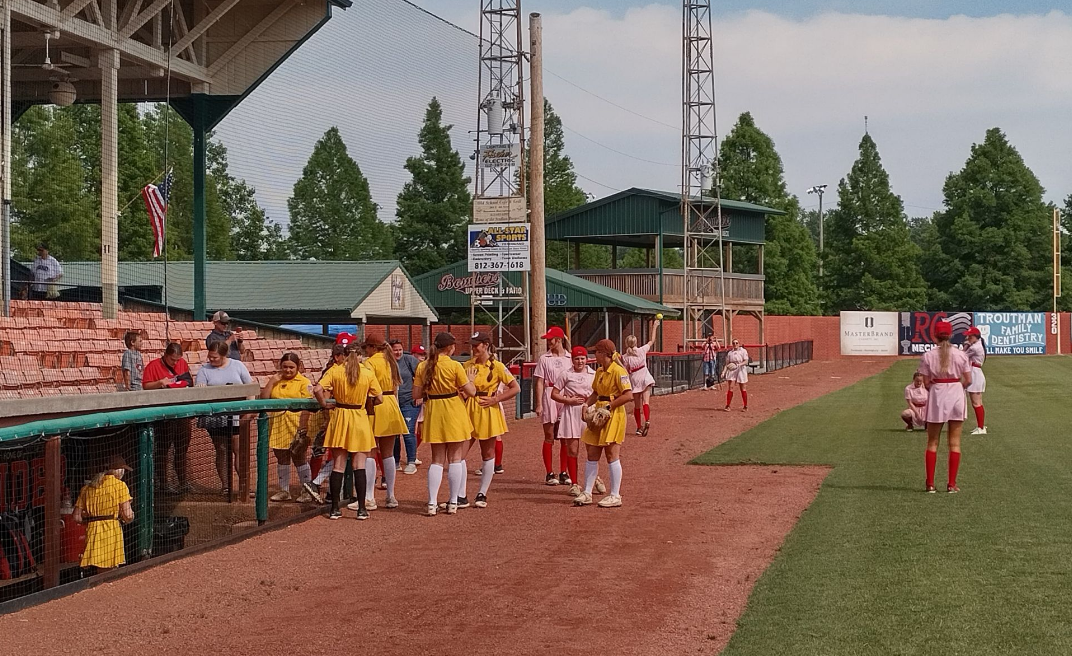 Peaches and Belles warming up during pre-game.

McKeough finished the night with two of the five Peaches' hits.
Moving from the field in the 25th Anniversary game to the dugout in the 30th, Team Manager Allie Michel Schwinghammer put into perspective what both 'A League of Their Own" and Saturday's experience mean to her and the women involved.
"As a softball player, 'A League of Their Own', you ask the girls their favorite movie, it's probably their favorite movie," Schwinghamer said. "It's a cool way to remember the movie, especially being here and having the Bombers play here. It's just an extra night to get people out and get them watching the game." 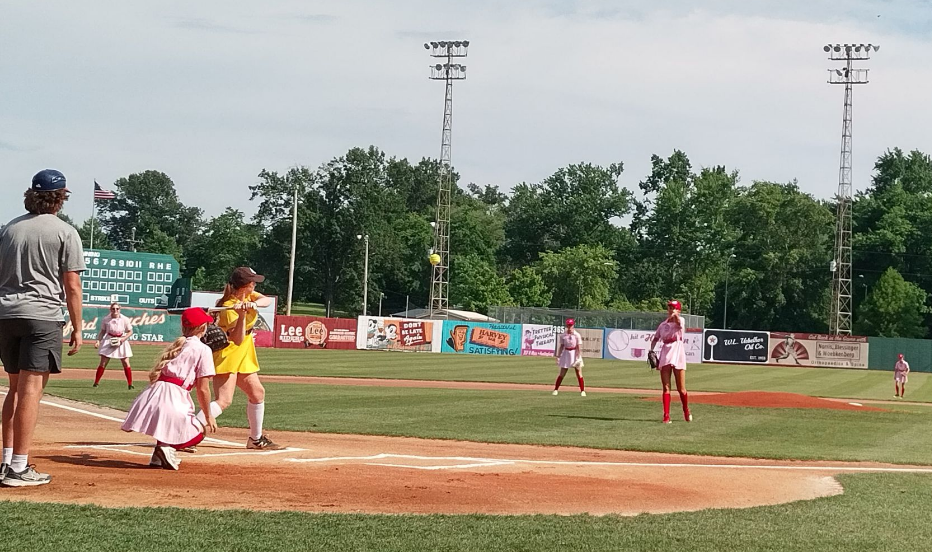 Peaches pitching to the Belles in the first inning.

Though the game was not just reminiscence for those taking part in the on-field action - but, also for those in the stands.
Prior to retiring at the age of 62, Carpenter Joseph Pund had been working at a nearby country club when he was approached by Harold Collins, of the movie's Art Department.

Pund, 92, remembers the long summer of work that went into the improved League Stadium.

"We first put in some concrete piers to move the old stadium back 14 feet towards the seats," Pund said. "We first started with about a week or so at eight hours a day, then we went to 10 hours a day and six days a week. It wasn't long before it was 12 hours six days a week."

Panoramic view from the pressbox at League Stadium.

The next anniversary celebration game has not yet been scheduled.

'A League of Their Own' premiered July 1st, 1992, starring Geena Davis, Tom Hanks, and Madonna. With a budget of $40 million, the movie grossed over $132 million. 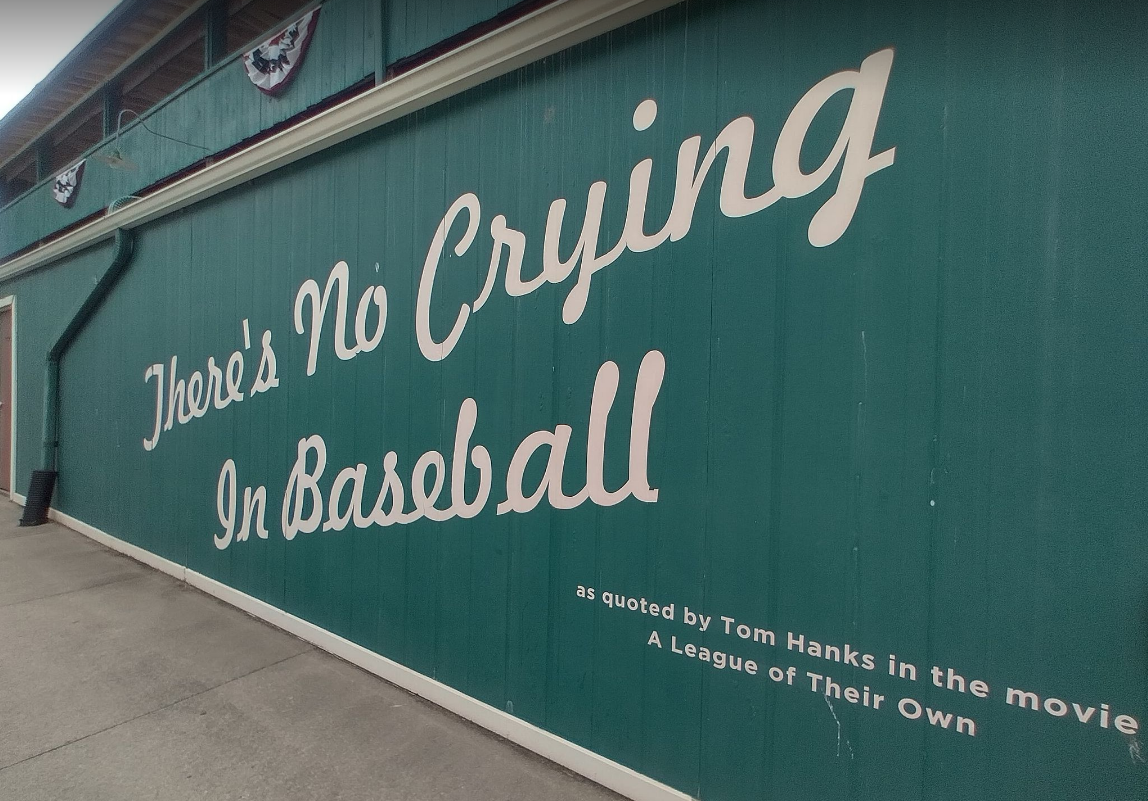 Famous quote from 'A League of Their Own' painted on the outside of League Stadium. 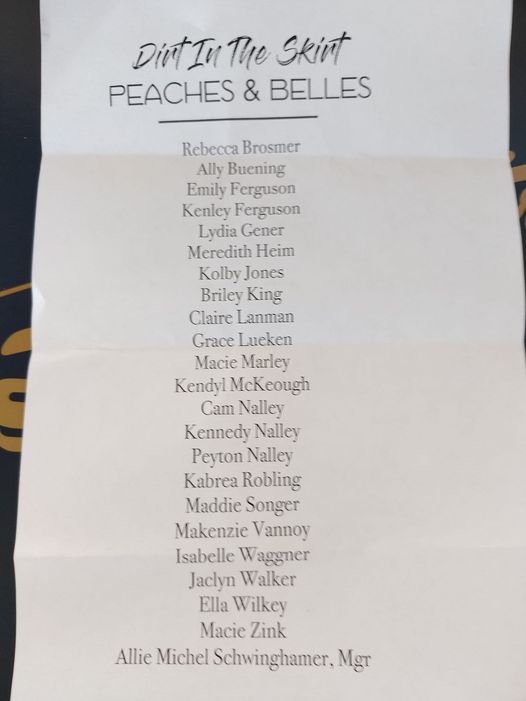