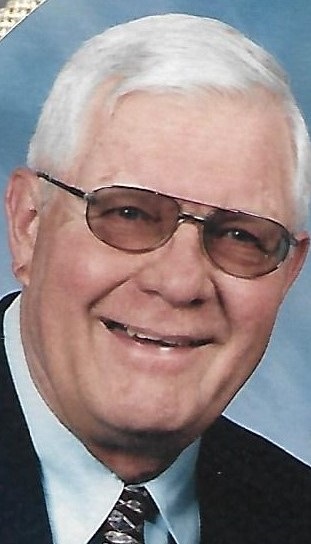 He was born April 24, 1931 to Oscar and Alice (Knust) Schnellenberger in Huntingburg.

Tom graduated from Huntingburg High School in 1949.  After graduation, he worked at the family gas station, Crider Filling Station, until joining the Navy in February of 1952.  He married Virginia Berg on October 25, 1952 at St. Joseph’s Catholic Church in Jasper.   After completing basic training in San Diego, CA, he then trained in Memphis, TN prior to being stationed in Corpus Christi, TX.

He received his honorable discharge from the Navy in 1956 then returned to Huntingburg where he worked at Roy Cox Oil Company until opening his own business, Tom’s Tire & Supply, Inc. with his wife in 1966.  He retired from their business in 1993.   He was a member of St. Mary’s Catholic Church in Huntingburg where he taught Religious Education to Juniors from 1966 to 1993; was a two term Parish Council Member, Server, Eucharistic Minister and Lector;  started and coordinated St. Mary’s Church parishioner van transportation; a founding member and treasurer of RIAL (Religion In American Life).

He was appointed annually by the Dubois County Commissioners to the Huntingburg Economic Development Council from 1999 until 2010.  He was also a member of the Jasper American Legion Post 147.  Tom is preceded in death by his parents; three sisters, Vivian Fischer, Dorothy Schmutzler and Judy Schnellenberger.

Please note, a celebration of life will be held once public safety for large gatherings is assured.

Nass and Son Funeral Home has been entrusted with the funeral arrangements.

In lieu of flowers, memorial contributions may be made to St. Meinrad Archabby, St. Mary's Church of Huntingburg, or the YMI Club.