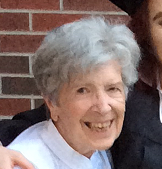 Sharilyn "Shari" Sue  Meneilly, age 80 of Jasper, IN, passed away on Tuesday November 19, 2019 from complications of COPD.

Shari was born in Anderson, Indiana on August 10, 1939 to H.K. "Buck" and Charlene (Davies) Rice. She married Louis A. Meneilly in 1961. He preceded her in death in 2010. They moved to Jasper in 1978 when Lou became a partner in Krapf-Bartley Insurance and eventually became sole owners of the business.
Shari spent most of her life as a consummate volunteer. Starting as a Cub Scout Den Mother and Girl Scout troop leader, she continued to serve on many non-profit boards. She was a past board member of the Shiloh Meeting House/ Cemetery, the Jasper Chamber of Commerce's Patoka 2000 and the Strassenfest Committee, and was past president of Memorial Hospital Auxiliary Inc, Twentieth Century Literary Club, and Historic Jasper, Inc. During her time with Historic Jasper, Shari was one of the editors and writers of the "History of Jasper" book and was instrumental in helping move the Gutzweiler-Gramelspacher House to its current location. She served for several US Congressmen as an advisor for recommending Southern Indiana high school students for the nation's military academies. She was a long term Republican inspector for Dubois County elections. In 2000, she was awarded the Jasper Jaycee's Distinguished Service Award in recognition for her volunteerism.

She was collector of porcelain, an avid nonfiction book reader, and a history enthusiast.

Contributions may be made to the Dubois County Humane Society or Japer Chamber of Commerce Patoka 2000.