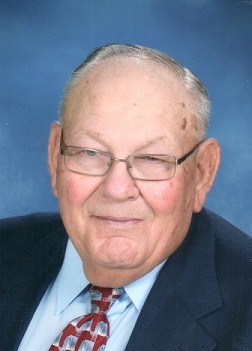 Richard was born in Loogootee, Indiana, on August 8, 1941, to Luther J. and Amanda (Himsel) Hoffmann.  He married Barbara Mann on July 30, 1966, in St. John's Lutheran Church in Boone Township.

He was a 1959 graduate of Loogootee High School.

He was a lifelong farmer, receiving the  Master Farm Conservation Award in 2005-2006.  His family was awarded the Farm Family of the  Year award in 2014, and the Conservation Family of the Year in 1992.  He was a partner in Otwell Farm Service and served on the advisory board of the Dubois County Bank.

He was an active member of Christ Lutheran Church in Haysville, Indiana, where he served on and was past member of the church council.

He enjoyed spending time with his granddaughter, teaching her how to drive the four wheeler and fish.

Preceding him in death besides his parents, are one brother, Al-fred Hoffmann, and three brothers-in-law, William Bosley, Paul McGiveney, and Howard Roberts.

A funeral service for Richard W. Hoffmann will be held at 11:00 a.m. on Thursday, June 28, 2018, at Christ Lutheran Church in Haysville, Indiana, with burial to follow in Haysville Community Cemetery.  Pastor Timothy Kraemer will officiate.

Memorial contributions may be made to Christ Lutheran Church or to a favorite charity.