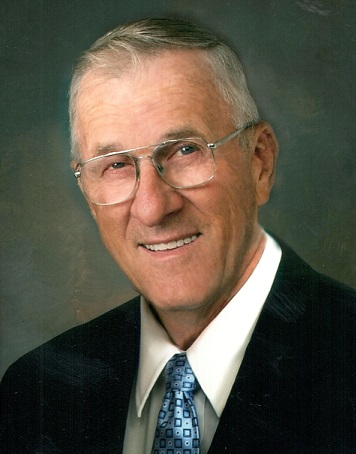 Rafe was born in Jasper, Indiana, on October 3, 1934, to Simon and Marie (Blessinger) Ackerman.

He grew up in a log cabin on the family farm in Ireland, Indiana.  He graduated from Ireland High School in 1952.  After graduation he returned to the farm and to the Simon Ackerman underground coal mine.

He married his devoted wife of 61 years, Phyllis M. Knies, on September 26, 1959, in St. Joseph Catholic Church in Jasper, Indiana.

A few months after the birth of their second child,  Rafe's father-in-law passed away unexpectedly.  Overnight, Rafe and Phyllis had to decide to leave the farm and start Ackerman Oil Company.  That company grew to incorporate Ray's Pump Shop, Jasper Tire & Supply, Nachurs Fertilizer and Circle A Food Mart.  Rafe was proud when the third and fourth generations joined the company.

Rafe was a good husband and proud father, grandfather, and great grandfather.  He proudly attended ball games, recitals, and plays.  He loved the annual family vacations and camping trips, and Sunday was always family day.

Rafe considered his children and grandchildren his greatest assets in life.  He enjoyed teaching them how to work and how to give back to the community.

After family, Rafe's biggest enjoyment was working and volunteering his time.  He was a Charter Member of the Precious Blood Catholic Church and helped to lay the floor in the church.  He was a member of the Precious Blood Endowment committee and chairman of the Turkey Shoot.  He was a Founding Father of ROJAC, a softball coach, IOMA Director, Jasper Country Club Director, Strassenfest Committee member and was always willing to help a friend.  He was awarded the 1998 JHS Alumni Award.

In his spare time he enjoyed dancing at the VFW, hanging at the Table of Knowledge at Headquarters, playing cards, teaching Sheephead and traveling.  Rafe and Phyllis visited every state in the U.S., traveling often in their RV and enjoyed learning about new cultures when they traveled abroad.

Preceding him in death were his parents, two sisters and their spouses, Irene (Ernie) Werne and Marge (Wilbur) Edwards, and two brothers-in-law, Jerome Moeller and Fred Brown.

A Mass of Christian Burial for Raphael "Rafe" Ackerman will be held at 11:00 a.m. on Saturday, February 13, 2021, in Precious Blood Catholic Church in Jasper, Indiana, with entombment to follow in the Fairview Cemetery Mausoleum.  The VFW Post #673 will conduct military grave site rights.

A visitation will be held from 9:00 a.m. until the 11:00 a.m. service time at the church on Saturday.  COVID-19 precautions, including masks and social distancing will be required.

Memorial contributions may be made to the Jasper German Club Endowment at the Dubois County Community Foundation or to a charity of your choice.