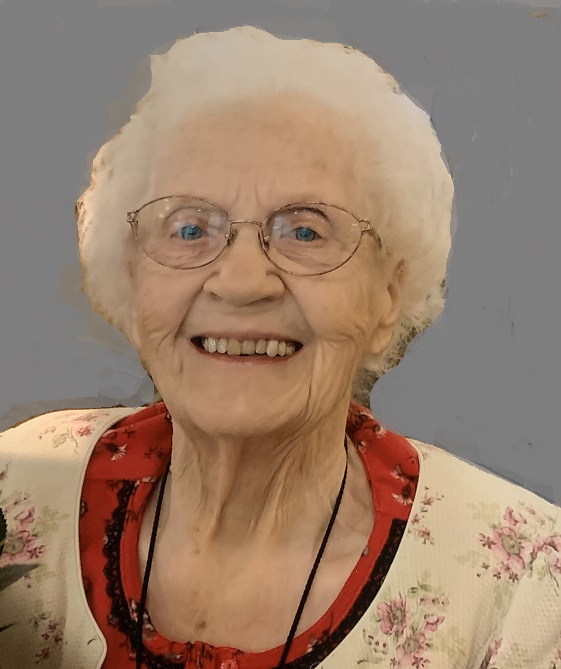 Mary Elizabeth (Jamieson) Ferguson was born to Livingston Jamieson and Merle (Hyde) Jamieson on June 14, 1925 in Rochester, New York. She peacefully left this world for her eternal reward surrounded by her loving family on September 16, 2022.
She was married to Roger J. Ferguson on May 12, 1956. She is survived by their children Laura (Stephen) McDonald, James (Audrey) Ferguson, and Christopher Ferguson. Grandchildren: Bobby (Sarah) McDonald, Samantha (Blake) Johnston, and Sean (Elizabeth) McDonald. Great-Grandchildren: Sophia (Eric Frazier) McDonald, Miriam McDonald, Jamieson McDonald, and Keira Steward. Great-great Grandchild: Rowan Frazier. As well as her nieces, nephews and many other loved ones.
She was preceded in death by her parents Livingston and Merle, her husband Roger, her son John, her brother Father Bede Jamieson, O.S.B. and her sister Barbra Ann Jamieson.
Though Mary was born in the state of New York, her family roots were in Derby, Indiana. After her parents traveled extensively for the Chrysler Corporation, as her father was employed with them, the family settled back in Derby.
At the age of 14, Mary began her high school years at the Academy Immaculate Conception in Ferdinand, Indiana. It was during her student years that a feeling of vocation to serve the Lord was born. She was an active teen playing tennis, softball and volleyball. She played the trombone in the school band and excelled as a concert pianist. Mary possessed a beautiful soprano voice, which she would bless others with through her life. Mary was also born with a natural artistic talent for drawing and painting. At the age of 12 years old, she painted a beautiful portrait of the “Young Christ in the Temple”. At the age of 17, she was asked to paint a fresco on the ceiling of St. Mary’s Church in Derby, Indiana. She accomplished this as Michelangelo did in the Sistine Chapel, by hanging backwards off a ladder, and painting the 10x20 foot images onto the ceiling of the church. An avid horsewoman, Mary trained horses as a young girl .At the age of 19, Mary swam with her horse “Nell” across the Ohio River at Derby,, Indiana to bring the horse from Kentucky. After High School, Mary felt a calling to the Monastic Life. She entered the Convent Immaculate Conception at the age of 19. She embraced her vocation as a nun, until life took her on another path.
She worked at General Electric in Tell City, Indiana and supported the post WW2 efforts to rebuild the country. Mary then entered the St. Joseph School of Nursing in Louisville, Kentucky, where she obtained her nursing degree in 1954. As fate would have it, in 1955, Mary was called back to this area by the Benedictine Nuns of Ferdinand. She went to work at the old Stork Memorial Hospital in Huntingburg. It was there that she was assigned as a private duty nurse for a man who had been crushed under a bridge. She remarked to herself upon entering his room, “What beautiful blue eyes he had”. They were married eight months later.
To this union, was born 4 children, Laura, James, John, and Christopher. Mary devoted her life to her family while working full-time as a Registered-Nurse. She was a Head Nurse at Jasper Memorial Hospital for years. She also worked at St. Ann’s Nursing Home, the Protestant Home, and Deaconess Hospital. She remained active in the Tell City Deanery of Catholic Women, serving as President. She was also President for the Academy Immaculate Conception Alumni. In her later years she would serve the parishes of St. Meinrad, Siberia, and Fulda as a member of the Tri-Church Choir. She coordinated the blood drives for the American Red Cross at the Archabbey in St. Meinrad till the age of 86. She also belonged to the Daughters of Isabella, and The Sodality of Mary. Mary also had a life-long hobby of crocheting. She created many beautiful designs in her craft without the benefit of patterns. Some of these earned Champion and Blue ribbons at County Fairs. She enjoyed gifting these works of art to family and friends. Though Mary suffered great personal tragedies over the years, she never lost her faith in the Lord, and believed in the hope of an Everlasting Life. A belief which she shared by remaining an Oblate of St. Benedict, adhering to these teachings during her lifetime. Mary leaves to mourn her, a family of which she was a true Matriarch. She also leaves a rich legacy of Faith, Devotion, and Love which she cultivated over her 97 years. Priceless gifts given by a life well lived.
Visitation will be at Becher Funeral Home in Ferdinand, IN from 3pm to 7 pm CST on Wednesday September 21st. Visitation will be on Thursday September 22nd from 9am to 10 am CST at St. Meinrad Parish Church, followed by Mass with burial in the church cemetery. Donations in her memory may be made to the Spencer County Humane Society, reflecting her love of animals.