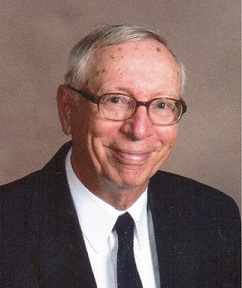 Levi M. Schnellenberger, age 77, of Jasper died at 5:05 a.m. on Saturday, May 2, 2020 in the Franciscan Hospice House in Indianapolis, Indiana, surrounded by his loving family.

Levi was born October 7, 1942, and was raised in his beloved St. Meinrad, Indiana, the son of Edwin and Gertrude (Vaal) Schnellenberger.  He graduated from St. Ferdinand High School, Ferdinand, Indiana in 1960.  Levi served in the United States Army from 1961 to 1964, which included 26 months in Hanau, Germany.  Levi developed his love for travel while serving in Germany; he took many trips throughout Europe while on leave from duty.  After serving his country, he attended Lockyear Business College in Evansville, Indiana, Brescia College in Owensboro, Kentucky, and Indiana State University, eventually earning his bachelor’s degree in Accounting and master’s degree in Business Administration.

On August 26, 1972, Levi married Thelma Waninger.  They raised their three children in Jasper.  Levi often commented that the best years of his life were when he was raising his family.  He devoted countless hours to youth sports in Jasper as a coach and board member, including Jasper Youth Soccer Board, Little League Baseball Board, softball, basketball, and the Dubois County Track Club. Levi was always a favored coach due to his calm demeanor and respect for his players.  He always had the “big picture” in mind in youth sports.  Levi also enjoyed his years with the Jasper Band Parents, where he served as treasurer for many years. He was also a member of the Dubois County John Purdue Club as well as accounting organizations.

Levi worked as a CPA, eventually retiring from the Dubois REC.  After his retirement, he was ordained a permanent deacon in 2005 for the Diocese of Evansville. He was a deacon for St. Joseph Catholic Church in Jasper for 15 years, where he also was a religious education teacher, lector, and member of Friday Memorial Hospital Communion Committee, Legion of Mary, and the St. Vincent de Paul Society.  Levi's passion for service continually helped the struggling in Jasper as he met with them to determine needs for the St. Vincent de Paul Society.   As a deacon, he was known for his personal, practical sermons.  Many times parishioners would call him at home after a Sunday sermon to compliment him.  Always humble, he would move on to a different subject in the conversation, which focused on the individual who had called him.  His influence in the Jasper community and his circle of acquaintances broadened throughout his life as he became a well-known, respected Jasper resident, known for his humbleness, authenticity, generosity, positivity, kindness, outgoingness, wisdom, and sense of humor.

Levi and his family enjoyed yearly vacations.  He was an avid Purdue University sports fan and football season ticket holder.  Levi also cherished the Indianapolis 500.  He was a lifelong learner, enjoyed reading, and was proud of his family.  His warm and easy-going personality brought comfort and joy to many as he was a man of great virtue and moral character.
Levi is survived by his wife of 47 years, Thelma Schnellenberger, Jasper, IN, three children, Sandra (Pat) Haney Shelbyville, IN, John (Julia) Schnellenberger, Stow, OH, and Karen (Keith) Gerhart, Plainfield, IN; 7 grandchildren, Brooke, Joshua, Bryce, Natalie, Andrew, Emilie, and Luke; two sisters, Doris (Charles) Seng, Jasper, IN, and Betty Millay, Evansville, IN, as well as beloved cousins, nephews, nieces and friends.

Private funeral services will be held at Becher-Kluesner Funeral Homes in Jasper, with burial to follow in St. Boniface Cemetery in Fulda, Indiana.

Memorial contributions may be made to St. Vincent de Paul Society of St. Joseph's Catholic Parish.