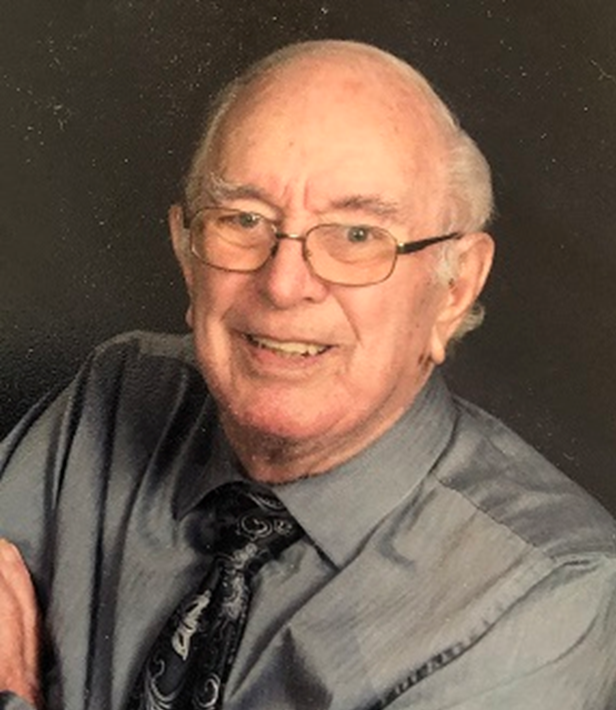 Kenneth was born in Jasper, Indiana on March 28, 1929 to Theodore and Hildagarde Matilda (Lehnen) Dudine.  He married Bettye (Leinenbach) on November 28th, 1953 at St Mary’s Catholic Church in Ireland, Indiana. She preceded him in death on June 19th, 2011.
Kenneth worked as an educator for his entire career. After graduating from Indiana State Teachers College in 1951, he began his teaching career in Mattoon, Illinois teaching math and science. He came back to Ireland in in 1958 to take a teaching role there, and along with Bettye, helped care for her father.  Ken received his Master of Science Degree from Indiana State University in 1966 and took a role as guidance counselor in Fremont, Indiana in 1967.
In 1969 Ken became the guidance director at Martinsville, Indiana High School and did that role for five years. Ken always loved teaching in the classroom, so in the fall of 1974 he went back to the classroom to teach math at Paul Hadley Junior High School in Mooresville, Indiana. He taught there for twenty years, retiring in 1994. He never stopped teaching even after he retired, often helping family members with math problems and in his later years often working through math problems with his three grandchildren on the phone.
Ken had a huge passion for many things.
He was a devoted husband, father, grandfather, brother, uncle, and friend. He was “Uncle Kenny” to so many people on both the Dudine and Leinenbach sides. In his later years he was a member of St Joseph’s Catholic Church in Jasper, where he often sang in the choir.  He always loved music and while living in Ireland was the choir director at St. Mary’s Catholic Church. He often sang for family members weddings and even sang the Nation Anthem at Ireland H.S. basketball games. He and Bettye loved to take drives and explore. Especially after they moved to Scottsdale, Arizona in 2007. They often would just jump in the car and a take off exploring that part of the country and the desert beauty. He loved to birdwatch and always had a variety of birdhouses and feeders wherever he lived.
When Bettye passed away in 2011, Ken wanted to come back home to Jasper. He wanted to be where he was familiar and where so many family members still lived. In his later years, back in Jasper, he was able to reconnect with so many friends and family members, enjoying life and being surrounded by the hometown and family he loved so much.

Preceding him in death besides his wife are both his mother and Father.  Also, Sisters Dorothy Meyer and Mary Ann Titzer and brothers Charles and Robert Dudine.

A Mass of Christian burial for Kenneth Dudine be held on Tuesday, September 29, 2020 at 10:30 a.m. at St. Joseph's Catholic Church in Jasper, IN with entombment to follow at Fairview Cemetery Mausoleum.

Masks and social distancing will be required for the visitation and Mass.