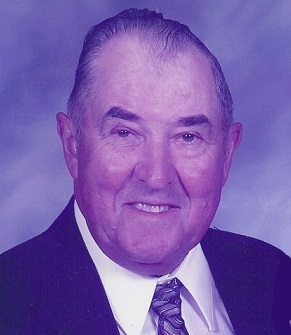 John was born at home in Ireland, Indiana, on March 12, 1930, to Andrew and Olevia (Durcholz) Weidenbenner.  He married the love of his life, Esther Tretter, on July 21, 1951, in St. Ferdinand Catholic in Ferdinand, Indiana, and they enjoyed a 64-year marriage.  She preceded him in death on December 27, 2015

John enjoyed dancing waltzes and polkas with Esther and attending dances with their friends.  He and his wife had a large circle of friends who dined out together and played card games.  His passion was tractor-pulling with Denny, his “favorite son”, as John called him.

Preceding him in death besides his wife are one son-in-law, Al Howard, two brothers, Morris and Jerome Weidenbenner, and two brothers-in-law, Alvin Mehringer and Maurice Eckerle.

A Mass of Christian Burial for John A. Weidenbenner will be held at 12:00 p.m. (noon) on Wednesday, October 13, 2021, in St. Mary’s Catholic Church in Ireland, Indiana, with burial to follow in the church cemetery.

Memorial contributions may be made to a St. Mary’s Catholic Church, Heart to Heart Hospice Foundation or to a favorite charity.