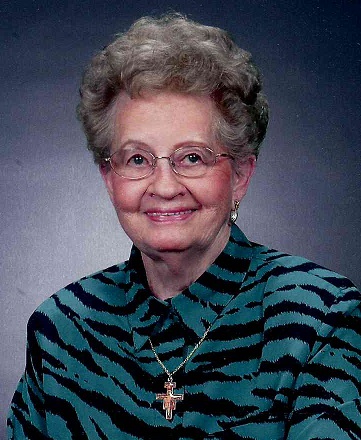 Esther was a homemaker and worked in retail until retirement.

She was a member of St. Joseph’s Catholic Church, the D of I, and the St. Ann’s Society.

Preceding her in death besides her husband, are one great grandson, and one sister, Olivia Hasenour.

A Mass of Christian Burial for Esther M. Englert will be held at 11:00 a.m. on Friday, June 3, 2022, in St. Joseph Catholic Church in Jasper, Indiana, with entombment to follow in the Fairview Cemetery Mausoleum in Jasper.

A visitation will be held from 9:00 a.m. until 10:45 a.m. on Friday, prior to Mass, at the Becher-Kluesner Downtown Chapel in Jasper, Indiana.

Memorial contributions may be made to St. Joseph Catholic Church, the D of I, or the St. Ann’s Society.