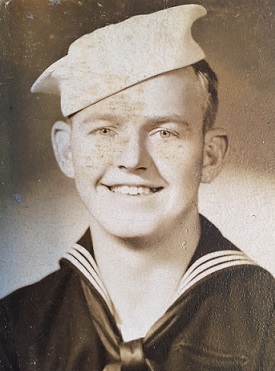 Charles was born in Jasper, Indiana, on March 15, 1929, to Frank and Rose (Marks) Fromme.
He attended Jasper High School and was a U.S. Navy Veteran, serving as a Medical Corpsman in a U.S. Marine Corps unit, during the Korean War.
Charles worked as a cartographer for AAA in California for many years, where he traveled extensively throughout the United States and Mexico, as well as England and Scotland. He later worked for Jasper Seating Company and the American Legion Posts of both Jasper and St. Meinrad.
While living in California, he had professional voice training, and after returning to Indiana, sang with the Sacred Heart Church Choir in Schnellville.
Charlie’s great love of country life, especially time spent with his horses and peacocks, was equaled by his joy of spending time, on his farm, with his many siblings and their children.
He is survived by 27 nieces and nephews.Preceding him in death are three sisters, Lenore Huls Stemply, Delores Potter, Joanne Woolsey, and four brothers, Vincent, Frank Jr., Thomas, and Norman Fromme, and five nieces and nephews.
A Memorial Mass for Charles G. Fromme, will be held at 11:30 a.m. on Saturday, March 7, 2020, in Sacred Heart Catholic Church in Schnellville, Indiana. The American Legion Post #147 will conduct military rights. A reception will be held following the Memorial Mass.
In lieu of flowers, memorial contributions may be made to the Birdseye Volunteer Fire Department and/or Divine Mercy Parish.