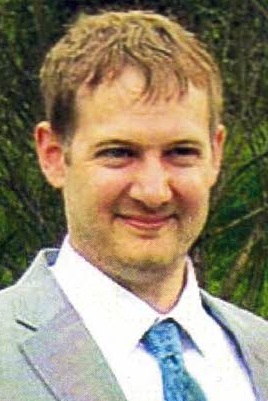 Brandon Kunkler, 45, of Bloomington passed away October 18, 2022 at his home. Brandon was born on September 11, 1977 in Huntingburg, Indiana to Michael G. and Lana J. (Nahler) Kunkler.

Brandon received his Masters of Electronics from Stevens Institute of Technology. Brandon was a valued member of the Indiana University Center for Exploration of Energy and Matter, and formerly the Indiana University Cyclotron Facility. He designed and built state of the art electronics for many proton therapy and physics research projects over the course of 16 years. In the first years he was instrumental in proton beam diagnostic equipment and controls to ensure safer and more effective proton therapy for hundreds of cancer patients treated at Indiana University. He developed readout electronics and firmware that is essential to fundamental physics measurements happening at several laboratories around the world, from Tsukuba, Japan to Geneva, Switzerland and to the upper reaches of the stratosphere on a high altitude balloon. Most recently, he designed and wrote much of the control programs for a new electronics module to be used in the ATLAS Experiment at the Large Hadron Collider, which operates at the CERN Laboratory in Geneva, Switzerland.

Brandon took great pride in the quality of his work. His colleagues liked and respected him, and he was well known for his skill and top-notch work. His loss leaves a huge hole in the Indiana University Physics Department, but a legacy of science enabled by his hard work and a standard of excellence for future engineers. Brandon invented and patented an Unmanned Underwater Vehicle. Brandon was passionate about wakeboarding, kiteboarding, wind surfing, rock climbing, snowboarding, and he was an avid fisherman.

Surviving are his wife, Susan Seo. His parents, Michael and Lana Kunkler of Saint Meinrad. Several Aunts and Uncles, and Cousins also survive. He was preceded in death by his grandparents, John and Anna Kunkler, and Allen and Rosemary Nahler. A cousin Kurt Philipps.

A mass of Christian Burial will be held on Thursday November 3rd in Saint Meinrad Church at 10:00 AM CDT. Visitation will be at the church from 8:00 AM CDT until the service time. In lieu of flowers please plant a tree in Brandon’s memory. Online condolences may be shared at www.becherfuneralhome.com.