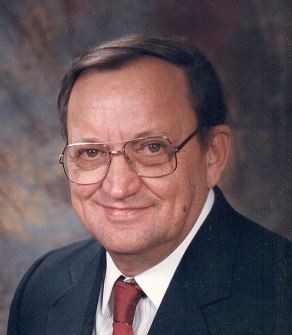 He was a veteran of the U.S. Army, serving in Germany during World War II.  Before his retirement, he and his wife were longtime insurance agents for AFLAC, specializing in helping families with Cancer Care insurance.  This was very important to him and Joan because they lost a daughter, Kathryn Lynne, to leukemia in her infancy.

Prior to working for AFLAC, he worked on production lines in the Dolly Madison Industries (DMI) factory in Huntingburg and Jasper Wood Products.

He was a member of Divine Mercy Parish - St. Anthony Campus, where he and his wife sang in the church choir, V.F.W. Post #673, American Legion Post #493, Holy Name Society, and St. Vincent de Paul Society.

He enjoyed playing cards, spending time on the computer, as he was very computer literate.

A Mass of Christian Burial for Bernard Aloysius "Pop" Englert will be held at 10:00 a.m. on Friday, July 27, 2018, at St. Anthony Catholic Church, with burial to follow in the church cemetery.  The V.F.W. Post #673 will conduct military gravesite rites.

A visitation will be held from 2:00-8:00 p.m. on Thursday, July 26, 2018 at the Becher-Kluesner North Chapel in Jasper, and one hour before services at the church on Friday.