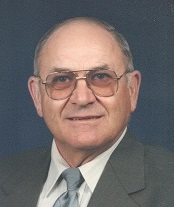 Albert L. Schnarr, age 82, of Jasper, Indiana, passed away at 12:15 a.m. on Tuesday, March 31, 2020, at Northwood Retirement Community in Jasper, Indiana.
Albert was born in a farmhouse in Daviess County, Indiana on March 10, 1938, to Robert and Eline (Sendelweck) Schnarr .  He married Shirley Freyberger on May 23, 1959, in St. John's Lutheran Church in Boone Township officiated by Reverend Paul Seneff. Albert was a self employed farmer and bus driver for the Greater Jasper Consolidated Schools for 40 years. He was a deacon, a trustee, and a Luther League youth sponsor for the St. John's Lutheran Church. He and his family received the Heritage Farm Award for over 50 years of farming through Farm Credit Services of Mid-America. He graduated from Alfordsville High School in Alfordsville, Indiana in 1956.  He was a United States army veteran who served in Korea.  He was a lifelong member of St John's Lutheran Church in Boone Township and a member of the American Legion. In Albert's early years, he enjoyed mushroom hunting, square dancing, boating, and tractor pulling where he won several trophies. Later in life, he enjoyed attending demolition derbies and going on family vacations all over the United States. His lifelong dream was fulfilled when he saw the Grand Canyon with his family.
Surviving are his wife of 60 years, Shirley Schnarr, Jasper, IN,  one daughter, Cheryl L. (Terry) Stemle, Jasper, IN, one son, Jerry D. (Patti)  Schnarr, Shoals, IN, and three grandchildren, John (Michelle), Joanna, Anthony Schnarr, and two great grandchildren, Michael Eugene and Kyle Luther Schnarr.Preceding him in death was one sister, Marcella Hoffman.
Private services were held at the Becher-Kluesner Funeral Home downtown chapel in Jasper, Indiana, with burial at  St. John's Lutheran Church Cemetery in Boone Township.