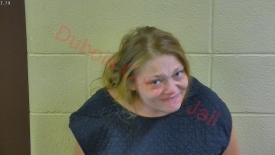 JASPER -- A Chrisney woman was arrested in Jasper this week on theft charges.

Police say 30-year-old Tina Best was caught by employees putting items into her purse at the Dollar General store on the north end of Jasper.

Arrest reports show Best became combative while enroute to the jail and had to be retrained.

When she got to the jail, the woman had a possible medical issue and was taken to Memorial Hospital.

After her release from the hospital, she was jailed on charges of Theft and Resisting Law Enforcement.