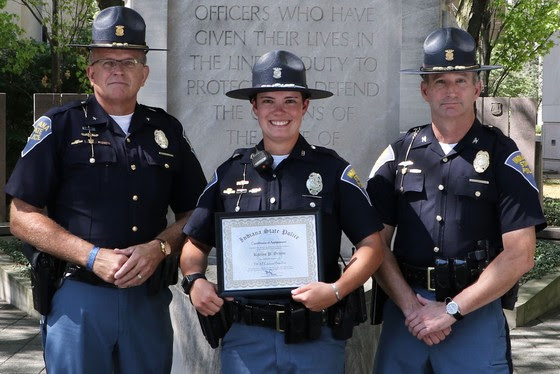 Greene is a native of Spencer County and graduated from South Spencer High School.  Following high school Greene attended Vincennes University graduating with an Associate’s Degree. Her career with the Indiana State Police began in 2014 as a member of the 74th Indiana State Police Recruit Academy that graduated in December of 2014.

Greene has spent her entire ISP career assigned to the Jasper Post.  In 2018 Greene received the department’s Life Saving Award from Superintendent Carter for her role in saving a kayaker from drowning in a drain pipe.  During her tenure she has served as a Tac Med Instructor, Scuba Diver, a District K9 Handler,  and now Trooper Greene is one of the first 2 females to be chosen to serve on ISP SWAT K9 Handler. The Jasper Post is very proud of the dedication Trooper Greene has displayed during her career.