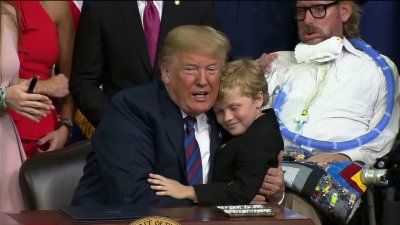 WASHINGTON, D.C.--A terminally ill person will have the "right to try" experimental drugs that might help, without having to get approval from the Food and Drug Administration. Pres. Donald Trump signed the "Right to Try" bill into law, Wednesday. The bill was co-sponsored by Sen. Joe Donnelly (D-Ind.).

"It could make a difference for families in Indiana and across the country whose loved ones have terminal illnesses and are seeking access to potentially life-saving clinically tested medical treatments," said Donnelly.

He said the legislation, which was introduced in August 2017 and passed by the Senate, had a difficult time in Congress, before being passed by the House last week.

Donnelly worked closely with Indianapolis resident Laura McLinn and her son Jordan McLinn, who has Duchenne muscular dystrophy, a disease with no cure, and he discussed the importance of advancing the Senate-passed bill with Vice President Pence during a meeting last month," said a news release from Donnelly.

Trump expressed support for Right to Try during his State of the Union earlier this year. FDA Commissioner Scott Gottlieb recently announced his support for the Donnelly-Johnson bill.

"We have drugs that are in the pipeline anywhere from 10 to 15 years and they may be very good. But, you're not allowed to use them," said Trump. "These people are terminal. They're terminally ill. They're going to die and they had no access, no access at all to getting into that pipeline, to getting something that may or may not work."

A CBS analyst reported that Right to Try may not change much. The FDA already has a program through which people could receive a conditional approval to use experimental drugs. The agency approved nearly 100 percent of the requests.

The Right to Try legislation would make the process simpler, and take the FDA out of the equation.