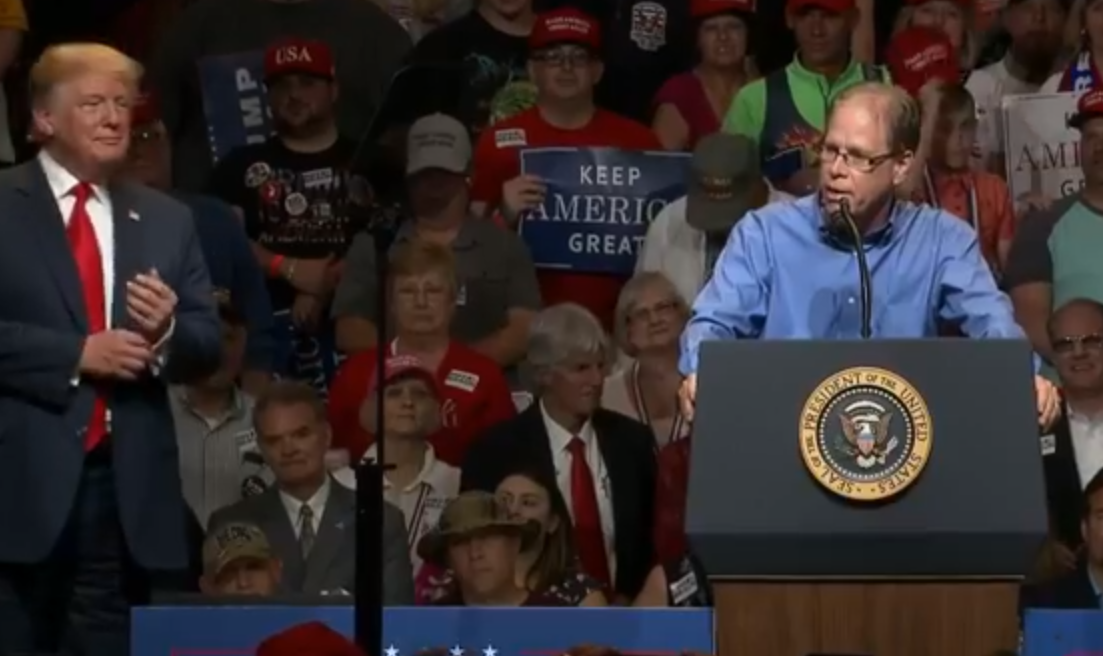 ELKHART --"Keep America Great" is the slogan for Pres. Donald Trump's 2020 campaign for re-election. He introduced the slogan, saying it was being revealed for the first time, in his Thursday night speech in the Northside Middle School gym in Elkhart.

Railing against Democrats for at least ten minutes, he called Sen. Joe Donnelly the least effective lawmaker in the Senate. Trump promised to fight against "Sleepin' Joe" Donnelly, as he referred to the senator, if he didn't support the tax cut law, which he did not.

"One of the neatest experience of my life was spending 30 minutes riding with the president. And, you wouldn't believe the advice you get, and it's great advice," said Braun, who said his vcampaign was inspired by Trump's 2016 run for president.

"He cleared the field systematically and really that was the inspiration for doing it," said Braun. "When I get there, I'm doing it for the right reasons. I'm a businessman and an outsider, just like the president."

Both Trump and Pence acknowledged the vice-president's brother Greg, who won a Congressional nomination on the Republican side in Pence's old district. Trump sent several shoutouts into the crowd for Republicans who represent Indiana, including recently-defeated Rep. Todd Rokita.

"Somebody that just fought an incredible campaign, a real good guy, very effective, a terrific man, Congressman Todd Rokita." Trump added that he didn't know if he would have been able to be at such an event, had he just been beaten in an election.

Both Pence and Trump talked about illegal immigration, building the wall, 2nd Amendment rights, repealing ObamaCare, and bringing jobs back to America.

"Since Indiana voted to send him (Trump) to the White House, businesses have created more than 3.1 million jobs, including 33,000 new jobs in the Hoosier State alone," said Pence. "Manufacturers have added more than 315,000 good-paying jobs, in fact there's been 8,000 new, good-paying manufacturing jobs just here in Elkhart Indiana."

Democrats responded to the Trump/Pence rally. Outside the buiklding, protesters lined up with signs, saying the men had not done enough for workers. Trump acknowledged their presence, but not their message, saying they wouldn't get in.

“President Trump, former Governor Mike Pence and Rep. Braun all pretend like they have Hoosiers’ backs, but their records prove that’d rather play politics than protect our jobs from being shipped out of the country,” said Mike Millsap, USW District 7 Director.

“Their campaign rally will be overshadowed by these false promises, as Hoosiers like myself know they’re more interested in protecting themselves and their outsourcing friends instead of doing anything to help us.”

“It's okay that the President and Vice President are here today for politics, but problems only get solved when you roll up your sleeves and put in the hard work," said Donnelly in a prepared statement. "I'm Indiana's hired help in the Senate because I don't work for any president or any political party - I work for Hoosiers, and that will never change."

The rally was the first time Trump and Pence have appeared together in Indiana since before they took office.