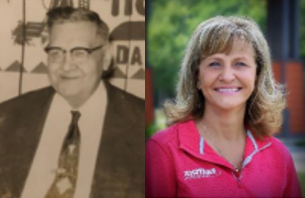 After a large field of applicants were fielded for the 2022 induction honor, Brenda Stallings (active), of Matrix Integration, and Emil Caldemeyer (historical), of Holland Dairies were selected to the Dubois County Business Hall of Fame.

This year's Co-Chair of the Dubois County Business Hall of Fame Induction Committee Chad Hoffman expressed how difficult it became to narrow this year's field, and how Stallings and Caldemeyer exemplified the values of Junior Achievement and Dubois County.

"The selection committee had the daunting task of vetting that whole process, so, there was a good conversation about our laureates, everything they've done for Dubois County, there's some intangibles that come into play," Hoffman said. "But obviously things that exhibit Junior Achievements Three Pillars - being work ready, financial literacy, and entrepreneurship - people that really embody that... What they've done for the community, not just business-wise, but philanthropy-wise, a lot of different things go into that decision."

VUJC Assistant Vice Principal and Campus Dean Christian Blome says that the University is happy to play a part in the Dubois County Business Hall of Fame selection process, and admires the Junior Achievement's efforts with students throughout the county.

"We are so proud to be partnered with Junior Achievement, the work that Junior Achievement does with our elementary, middle school, and high school students here in the county is tremendous," Blome said. "Really adding a richness to our curriculum in our K-12 schools and opportunities for our students to learn about business and finance and leadership principles tied to local companies, and through the Business Hall of Fame, tied to local leaders. So they can see real examples of leadership and entrepreneurship locally."

Brenda Stallings, CEO of Matrix Integration, has spent 42 years in the technology industry. In the Hall of Fame's 7th year, Stallings will become the first woman inducted.

Caldemeyer was instrumental in the founding of Holland Dairies and served as the company president until 1956.

Dentons Bingham Greenbaum will return as the title sponsor in 2022 for the Hall of Fame induction.

Full biographies provided by the Junior Achievement Business Hall of Fame:
Brenda Stallings: Matrix Integration (active) Brenda Stallings has 42 years of experience in the technology industry. As CEO of Matrix Integration, she gives her company the leadership that has the expertise to solve complex IT business problems. Beginning her career as a typesetter and proofreader for Psychology Today and Marriage Magazine, she proceeded to own her own computer company, which later merged with a telecommunications company to form Matrix Integration. Three of her children are also active in the business along with her long- time business partner Dan Fritch.
As a Woman Owned Business leader, Brenda has emerged as one of the most Powerful Women of the Channel as selected by CRN (Computer Reseller News) for her commitment to driving growth and innovation in the Technology industry. With her at the reigns, Matrix Integration has been recognized over the years, in the top Best Places to Work in Indiana, numerous listings on the VAR 500 (500 Value Added Resellers) list which recognizes the largest solution providers in North America, the #1 Indiana Top Woman Owned Business, a past Small Business of the Year honoree by the Indiana Chamber of Commerce, a past Indiana Women’s Business Enterprise National Council (WBENC) award winner, the past national Enterprising Women of the Year award as well as being honored by the Excel Bloomington award. The Athena Leadership Award for Dubois County and the Distinguished Citizen Award sponsored by the Buffalo Trace Council were some of the highlights of her career.

Brenda is very active in her community holding board roles in the non-profit she founded called EinDC (Education & Entrepreneurship in Dubois County), Memorial Hospital, the Indiana State Chamber and several non-profit committees she serves on throughout the state of Indiana. She’s also active in the University of Louisville Family Business Center which networks with other family business owners helping them understand the nuances of working with family. She has been very active in JA (Junior Achievement) from the early formation years in Dubois County, allowing the JA companies 5,000 sq feet of free rental space to gather and produce products. And in past years she was active in being a co-chair on the fundraising committee.

Her recent venture is investing her time, talents and treasures in a local application development project which will support communities locally and across the country, helping each other learn what’s in their communities which in turn will help business and industries grow and succeed.

Matrix Integration has regional offices in Fishers and Bloomington, Indiana as well as Louisville, KY with corporate headquarters in Jasper. We are proud to be thriving in the technology industry in our 43rd year. We will continue growing for many years to come; with a motto "let the journey continue."

Emil Caldemeyer: Holland Dairy (historical) E. F. Caldemeyer was born in Holland; but he opened his first business, a restaurant, in Vincennes in 1914.
He later returned to Holland and in 1917, married Emma Hunefeld; and together they ran the restaurant. Mrs. Eloise Henke, their daughter, can remember when they milked their own cows, and her mother would pasteurize the milk in the kitchen and then bottle it on the kitchen table. She said that they would then sell the milk in the restaurant, as well as batches of ice cream that E.F. Caldemeyer experimented in trying to perfect his Holland Custard. He kept experimenting until he got the formula he wanted, and it is still the same secret recipe used today.
Business continued at the Caldemeyer’s Restaurant in much this same fashion until 1931. Amidst the depression, Caldemeyer then gathered together a group of men from Holland and together they formed a company to manufacture ice cream. These men believed they could help surrounding dairy farmers as well as the town itself by expanding Caldemeyer’s ice cream operation into a company for manufacturing and distributing dairy products. Caldemeyer started with $200 worth of ice cream equipment ($8 down and $8 a month) and a Model T Roadster which he converted into a pickup truck, and grossed $5,000 in his first year of business.
The company continued to prosper and in 1947, sales hit the one-million-dollar mark. E.F. Caldemeyer was president of Holland Dairies until he passed away in 1956. Celebrating 50 years in business in 1981, Holland Dairies employed 287 persons in Indiana, Illinois and Kentucky and produced an average daily output of 40,000 gallons of milk a day, as well as over 200 different ice cream products, fruit drinks, orange juice, cottage cheese and much, much more.

Holland Dairies has been recognized for many innovations in the industry, including producing “freeze dried” cottage cheese which was stored dry and made cottage cheese when mixed with water. It was used in the Mercury and Gemini space programs and also the Apollo moon program. More than a million pounds of it were sent to American servicemen in Vietnam. Holland Dairies was purchased by Prairie Farms in 1999, and today employs approximately 120 workers, and is supported as a farmer owned cooperative by approximately 80 farm families in an 8 county Southwest Indiana Region.