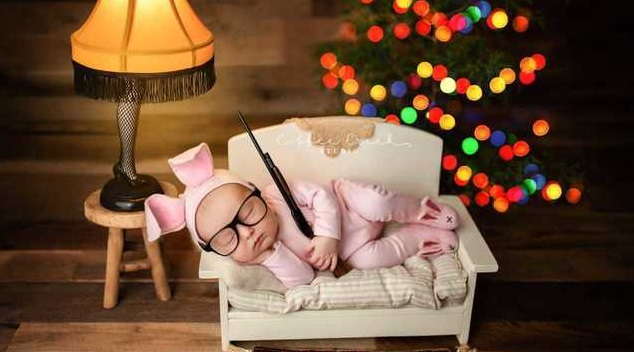 SHELBYVILLE, Ind. – An Indiana photographer who took a picture of a baby with a small, fake BB gun as a tribute to the holiday classic "A Christmas Story" is getting a lot of attention after some people on social media called the photo inappropriate.

Amy Haehl, who owns Coffee Creek Studio, says she did the photo shoot for a friend and posted a warning in anticipation that the scene with a baby and the fake BB gun might offend some people.

“**Disclaimer** the BB gun is made of wood to ensure that he did NOT shoot his eye out during the creation of this photo,” wrote Haehl on Facebook.

"Initially the comments started flooding in. expected it to be a popular photo because everyone loves that movie," Haehl said in an interview Monday with 93 WIBC's Tony Katz.

After people started posting negative feedback, Yahoo.com shared the photo and wrote an article with it about the response following the recent shooting deaths of 12 people at a bar in Thousand Oaks, California and the murders of 11 people in a mass shooting at the Tree of Life synagogue in Pittburgh.

"I think now it has kind of turned into maybe some people who don't understand the movie and just see this picture of this baby with a gun," says Haehl.

In spite of some of the negative response, Haehl says she has received far more positive support of the photo.

"I've never anticipated it to go to this scale, but it's amazing to me the amount of people that have supported me and have taken the time out of their days to say we support you," Haehl says.