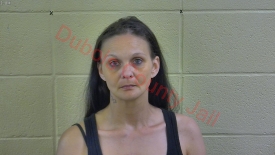 DUBOIS -- A Dubois woman is in jail today in connection to a string of break ins.

Police say sheriff’s deputies were on the scene of a separate incident when an onlooker alerted them to Chasity Jones.

Jones had an active warrant in civil court.

She’s accused of a string of break ins on Hickory Grove Road between November of last year and March of this year.

She’s charged with 6 counts of burglary and 6 counts of theft in addition to a count of check fraud.

Jones is lodged in the Dubois County Security Center.