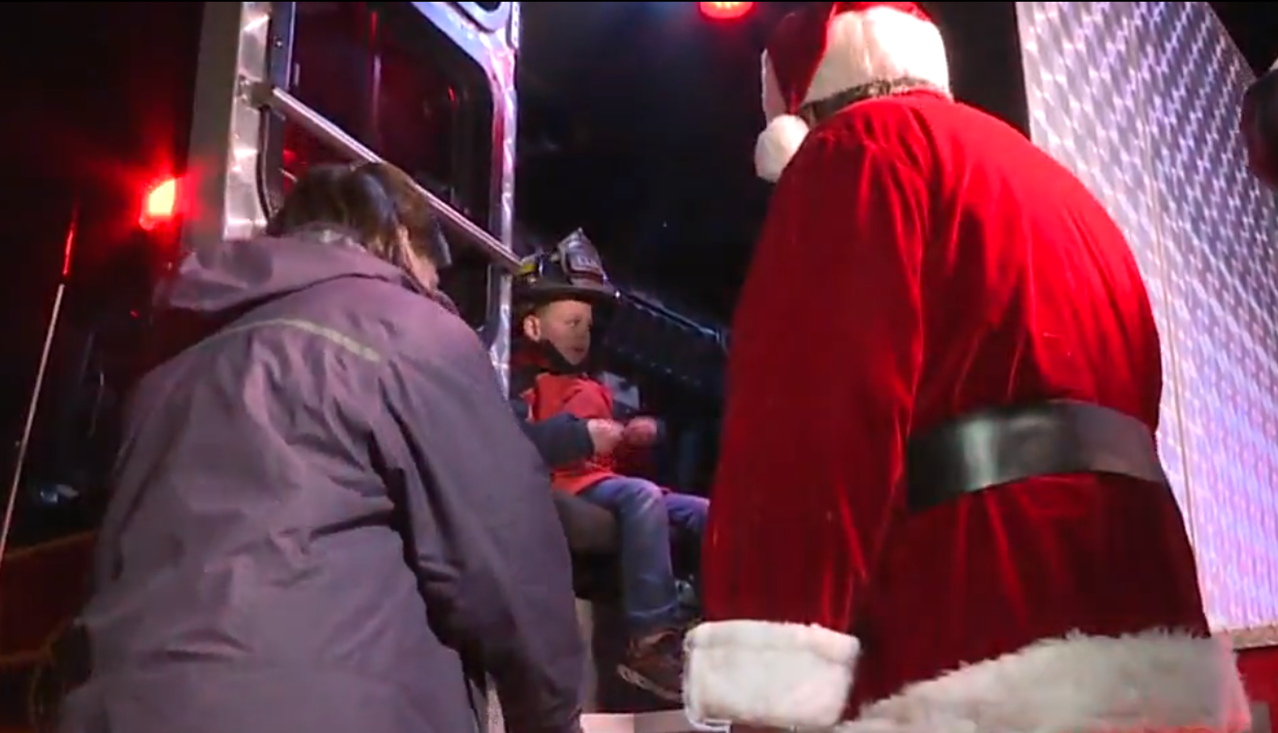 Santa made a special stop in Brownsburg for one little boy and his service dog. He got a lift from firefighters.

The boy’s family said they were refused service by a different Santa Claus this weekend and ever since Tyler Burkhart’s parents have been trying to bring the magic back.

Christmas for the Burkhart family has been so difficult through the years because their 8-year-old Tyler has autism and the lights and sounds are just too much.

They thought this year would be different with the help of their service dog, a golden retriever named Ryan.

But on Saturday night, after standing in a long line, they were turned away. The so-called “Bad Santa” and “Bad Elf” said Ryan couldn’t come because he might cause other children problems with their allergies.

“The damage had already been done at that point. You had a very crushed child,” said Tyler’s mother Alyssa Burkhart.

In the 48 hours, his parents have been doing damage control. Tyler has been worried that Santa wouldn’t visit or perhaps the Bad Elf would eat his cookies.

The Brownsburg Fire Territory heard about this and offered to bring Santa by.

So he came on the eve of Christmas Eve not on a red sleigh pulled by nine reindeer, but on eight wheels of a big red fire engine.

But, no matter. The look of awe and amazement on Tyler’s face was the same.

Alyssa had to hold back tears.

“Ryan is a wheelchair to a person who can’t walk. Ryan is his support. Ryan helps him function,” she said.

Alyssa said the last Santa broke the law by banning the service animal.

Alyssa says Ryan’s presence has opened the world to them. Now they go to restaurants and enjoy a normal life for the first time. He goes to school with Tyler, who is a third-grader at Reagan Elementary.

“I tell him to come lay on me,” said Tyler about Ryan. “Sometimes he sits down and he gives me his paw.”

Tyler got to honk the horn of the fire engine. But the highlight was spraying the hose down the street.

“He’s going to be talking about it for days,” adds Alyssa.

No trip from Santa would be complete without one gift who gave, what else, but a red fire truck to a boy who already loves firefighters and engines.

Tyler’s got a few more requests though, not just for him.

“I want Legos and football cards. And Ryan loves socks. He loves to eat them,” he said.

With a hug and a few photos out front of Santa’s sleigh, it’s clear the magic is back.

That’s the best gift to Alyssa who has been doing all she can to bring the joy of Christmas to her only son, along with his four-legged friend.

Just like the poem, this visit from St. Nick giving all a good night.

“Beyond happiness,” Alyssa said. “I can’t tell you how excited and happy this makes us.”

Every year, the Brownsburg Fire Territory takes Santa on a tour of the neighborhoods though they typically don’t do personal appearances.

Alyssa declined to say which location in Indianapolis the family tried to visit Saturday night. She has contacted them but has not been given much of a response.

While Ryan may be an unusual name for a dog, he was named by the training organization in honor of a police officer who was killed in the line of duty. So his name and his job title seem a bit appropriate.