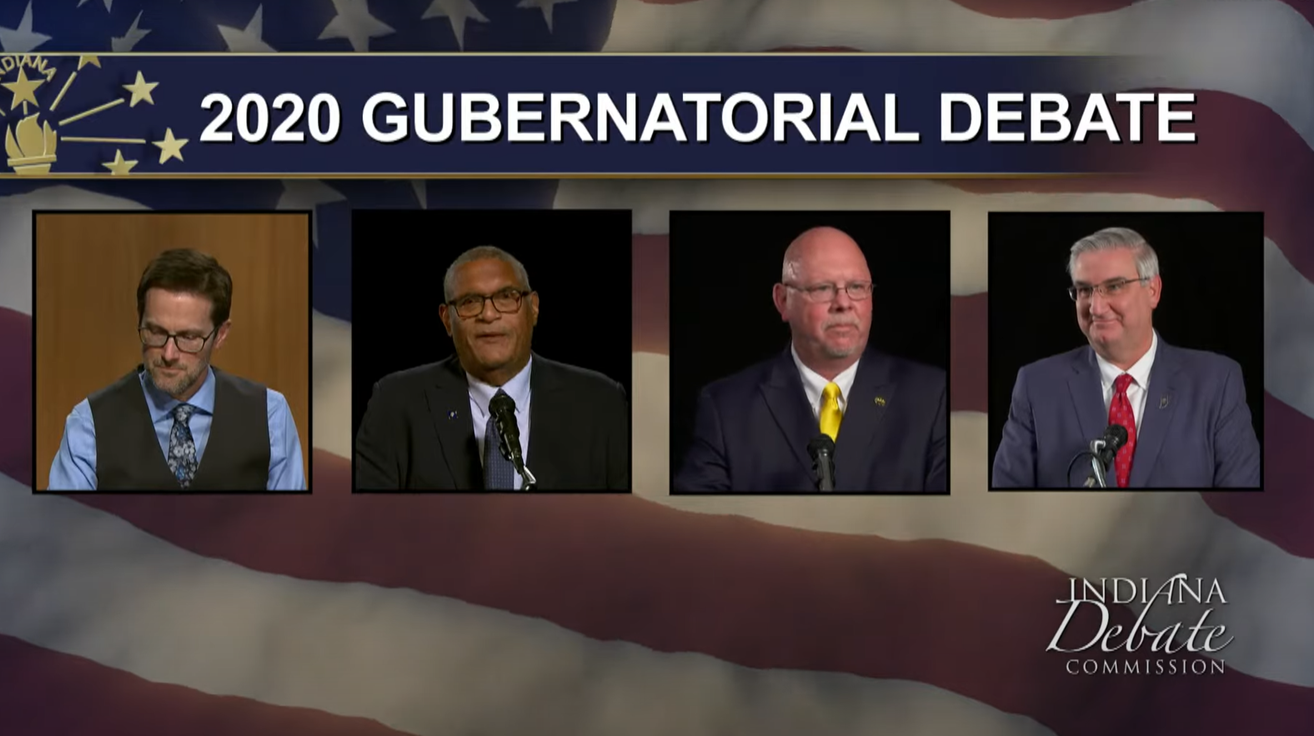 INDIANAPOLIS--The governor has the power to restrict your movements and make you wear a mask, says the governor. Incumbent Republican Eric Holcomb, Democratic candidate Dr. Woody Myers and Libertarian Donald Rainwater answered questions about education, the economy, guns and the powers of government, especially during a pandemic, in the first debate for the candidates, Monday night.

"I'd leave the court battles for later. Let's do what we can do right now to protect our citizens from this virus, until we have a safe and effective vaccine," said Dr. Woody Myers, when asked about governmental powers and the pandemic. The former state health commissioner was not shy in expressing his desire for more restrictions.

"I'm gonna make sure that they're (vaccine doses) are distributed effectively and safely throughout the state of Indiana and then we can begin to consider relaxing some of the requirements that I will put in place immediately."

One of those requirements is a mask mandate, with consequences. Myers said he is confident that a Biden/Harris administration would appoint a new head of the CDC and FDA, and he would wait on their recommendations on a vaccine to take action.

Rainwater said he believes the government has no place in telling anyone they have to wear a mask.

"Only you can determine what risk you're willing to take and what appropriate measures that you need to take for yourself, your family, your business, your church," he said, adding that it's government's job to provide you with the appropriate info to make decisions.

Both Holcomb and Myers compared to the mask mandate to being required to wear a seatbelt or not smoke in public places.

Holcomb, criticized for weilding what some people consider too much power during the pandemic, said he will be happy to sit down with the legislature in January to discuss it. Holcomb repeatedly complimented state lawmakers for having "infinite wisdom" in granting him those powers years ago.

That drew a rebuke from Rainwater.

"The members of the general assembly are human beings. They don't have infinite wisdom. And, in my opinion the extension of powers to the governor has been a mistake," he said.

The candidates also answered questions about teacher pay. Myers stated twice that he will appoint state Superintendent of Education Dr. Jennifer McCormick, a Republican who has publicly supported Myers, as his secretary of education. He also said he believes the answer to increasing teacher pay is a closer examination of the state budget, to prioritize education.

Holcomb pointed out that more than half of the budget goes to educating young Hoosiers.

Rainwater suggested decentralizing education and turning the money over to the local school boards, saving dollars spent on state bureaucracy, which could go to pay teachers more.

The three also differed on the ability to carry a firearm without a license. Myers opposes it outright.

"We've got to understand that guns kill people," he said. "The 2nd Amendment is gonna survive just fine without more individuals carrying more weapons around, brandishing them and scaring members of the public."

That statement drew a correction from Rainwater, who pointed out that carrying is not brandishing and that brandishing is illegal.

Myers said he supports strict background checks, while Holcomb did not say he would support getting a constitutional carry bill passed, saying a five-year free license has made it easy to own a gun for hunting or defense.

Rainwater said he is for fewer restrictions on gun ownership, and that owning them means the ability to defend oneself from crooks or big government.

The next debate, put together by the Indiana Debate Commission, is Tues., Oct. 27, at 7 p.m.