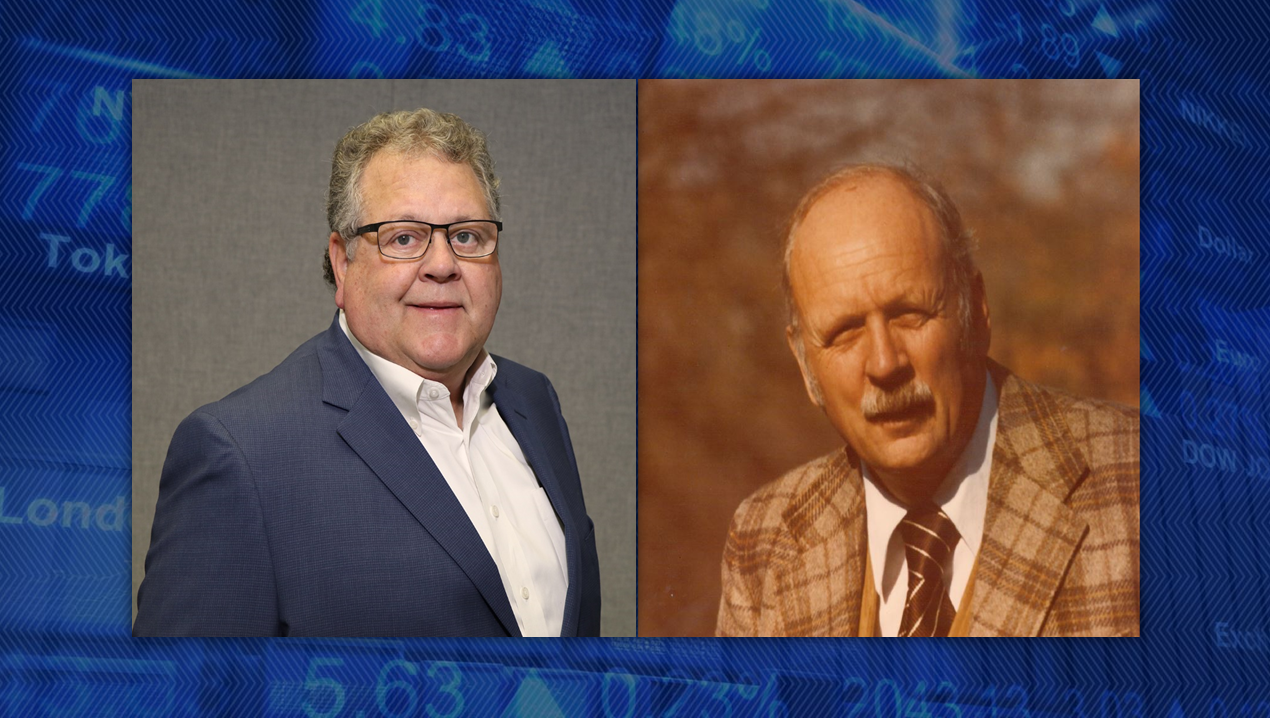 The announcement was made by Assistant VP and Campus Dean of VUJC Christian Blome. “As anyone who has had the pleasure of working or associating with them know, these two individuals are well deserved of this prestigious honor. Through business excellence, vision, innovation, and community involvement, they have provided inspiring leadership to this community. We all owe a tremendous debt of gratitude to Doug Bawel and Robert Menke Sr. for their generous philanthropy, tremendous efforts in the community and for the overall excellence of their character, in the way they conduct their business, and the way they conduct themselves. They truly are the kinds of role models we need for our young people, and for the area’s future business leaders.”

The Junior Achievement Dubois County Business Hall of Fame honors members of the Dubois Business Community who exhibit strong vision, innovation, inspiring leadership and who are visionaries within their respective industries. A crystal eagle symbolizing the spirit of free enterprise is presented to each laureate. A monument with a citation and image of each laureate will also be displayed at the Dubois County Museum.

Doug Bawel, CEO and Chairman of the Board of Jasper Engines and Transmissions

Doug joined Jasper Engines and Transmissions as a sales trainee in 1976, later served as advertising manager, sales manager, and vice president of sales before partnering with a group of Associates to purchase the company from its founder, Alvin Ruxer, in 1987 and was elected president. At the time, they had 550 Associates and sales of $58 Million.

In 1989, the company became involved with NASCAR, in 2001 teamed with Roger Penske to form Penske Jasper Racing and turned all their attention on building NASCAR’s future Transmissions. Eleven cars use them currently with 178 wins.

On March 2, 2010, JASPER became a 100% Employee Owned ESOP Company (Employee Stock Ownership Plan). Sales were $245 Million with 1460 Associate-Owners.  Today, there are 3300 Associate-Owners with the JASPER Family of businesses who have received in excess of $115 Million in JASPER Stock. Sales in 2018 were $649 Million.

In July 2011, Doug was named as Chairman/CEO of JASPER.

JASPER is the World’s Largest Remanufacturer of gas and diesel engines, transmissions and differentials. Although they are proud of that statistic, they like the following better: “Leader of the Industry in Quality.”  They also own a $40 Million parts company, a remanufacturer of large electric motors and 2 Premier Health Clinics.

JASPER purchased Weller Truck parts, headquartered in Grand Rapids, Michigan, in 2014. Weller remanufactures transmission, differentials and steering gears for the heavy duty truck market. Today, JASPER and Weller have 11 manufacturing facilities in Indiana, Michigan, and Missouri along with 78 branch locations across the country with Associate-Owners in 41 states. JASPER was named to Forbes List of America’s Best Midsize Employers for 2018.

Doug is a past recipient of the Indiana Business Leader of the Year award, Indiana Corporate Leadership Award, and Entrepreneur of the Year for Manufacturing.  He currently serves as President of Patoka Valley Health Care Cooperative, board of OFS Brands, and President of Affinity Insurance, the World’s largest heterogeneous Captive Insurance Company.

Doug has seven children and eleven grandchildren. His motto is “Do It Right and Have Fun…”

Robert Menke Sr., former Chairman of the Board of OFS

Robert Menke grew OFS from a small manufacturing company into the major employer it currently is with over 1,700 employees at this time.   He started working at a young age stringing Venetian blinds in his father, William Menke’s, factory.  At the time of his father’s death, Menke took over Du Crafts which had approximately 30 employees. When the Ferdinand plant burnt in 1970, it was moved to Huntingburg. Du Crafts became Styline and the businesses were merged.

Menke loved his town and served it well even as a young man when he led his basketball team to a state finalist game in the 1937. He was a member of the 1940 Indiana University’s NCAA Championship basketball team, won the Gimbel (now the Trester) Award, and was inducted into the Indiana Basketball Hall of Fame IN 1982.  Menke valued education and obtained his BA in government from Indiana University in 1941 and his Master’s degree in Government in 1953.  His commitment to building a better community was exemplified by his serving as state representative to the Indiana General Assembly from 1952 to 1954. He served his country as a 1st Lieutenant in the US Air Force during World War II and returned home in 1945 to take over business responsibilities.

Menke and his family were instrumental in the development and building of the Huntingburg Event Center which fills a major role in the economic and tourism development of Dubois County. Menke was very environmentally conscience and help encourage education in public and environmental affairs.  He was awarded the Nature Conservancy’s highest award, the Oak Leaf in 1982. During his life and career, Menke was awarded several honors, including the multiple Sagamore of the Wabash awards, University of Evansville Medal of Honor in 1988, and most recently the Distinguished Citizen Award of Boy Scouts of America in 1996. Menke and his family have been very charitable and supportive of the Dubois County Community Foundation and the various endowments managed by the Foundation. We are delighted to have Bingham Greenebaum Doll LLC as our title sponsor.  Sponsorship information, table reservations, or individual tickets can be obtained from Junior Achievement of Southwestern Indiana at 812-425-8152.