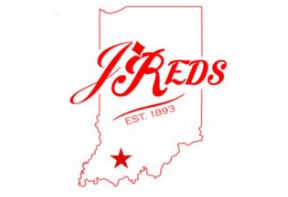 Vincennes -  The Jasper Reds remained undefeated as they downed the Terre Haute Bears 10-3 Saturday at Jerry Blemker field in Vincennes.
The game was tight until the bottom of the sixth. After the first two hitters were retired, Jasper Wildcat Ben Henke singled. Austin Simmers drew a walk before Reece Bauer drove home Henke. Clean up hitter Andrew Wallace delivered the big blow of the game as he hit a two-run homer, making the score 6-1 in favor the the Reds.
The final score was a 10-3 win for Jasper. Bo Daves went 8 2/3 innings and was credited with his fourth win of the season. Bo continued registering huge strikeout totals as he punched out 12. Daves issued 3 free passes and hit one batter. The Bears collected five hits in the game, all singles.
Kody Morton relieved Daves in the ninth and struck out the only hitter he faced-as the Bears stranded the bases loaded.
The Reds, now 6-0, are idle until Saturday, July 9, when they will host the Evansville Rattlers, a team comprised mostly of former USI players. That doubleheader is scheduled to begin at 2:30 p.m. at  Ruxer Field.