By Kris Norton and Roger Stuckey

Ferdinand - After over a decade at Forest Park Jr./Sr. High School, Head Football Coach Ross Fuhs is fulfilling a dream by heading home to coach at Southridge High School.

Fuhs is trading in Rangers' forest green and gold for Southridge's familiar red, black, and white.

As a lineman on the Southridge 2002 State Runner-Up Football team, Fuhs says it's a dream come true.

"When this opportunity presented itself, basically, I jumped at it - and the rest is history," Fuhs added.

Even though it was a dream opportunity, that didn't make his decision any easier.

"When you make a decision like that you know it's always going to be tough because you've got to leave really good people behind," Fuhs. "Like I've told people before, there's only one school that I would ever leave this school for, and it's Southridge."

Fuhs said that Thursday's training session became emotional. Knowing that the change would be announced during Thursday night's Southwest Dubois School Corporation School Board meeting at 5:30 p.m. - and that word would spread fast - Fuhs brought his players and coaches in for an announcement just before 6:00 p.m.

"Unfortunately, you can't control when openings come about and sometimes I hate the way that these things time out," Buening said. "It's not a controllable, so you know, [I'm] just frankly glad that it came together."

On the gridiron, Ross will work on the defensive side of the ball in addition to serving as the quarterbacks coach. Off the football field, Fuhs will hold other athletic responsibilities.

"He's actually going to be our Boys' Head Track Coach, which is something I'm really excited about," Buening said.

Fuhs will also be an integral part of the Southridge High School strength training program.

In the classroom, Fuhs is looking forward to teaching business classes, primarily.

"News travels fast and I can’t keep up with all the messages and calls, so here we go…..You make decisions each and everyday. Some are small, some are big and some are tough. I had to make a TOUGH ONE. Tonight, I was hired by the Southwest Dubois County School Corporation to go back home to Southridge, to teach and coach.
"Ranger Nation: First, THANK YOU to the past and present administration and school board, for bringing me in (13 years ago, wow) and having confidence in me, at your school corporation. I always have appreciated the support. Second, THANK YOU to the faculty and staff at FP. WOW, have we had some great times, whether it was at events, pep sessions or just chatting in the hall, you all are SPECIAL PEOPLE TO ME. Third, THANK YOU, to the players, coaches and parents, I’ve been lucky enough to be around. Coaching, just like parenting, can be hard. You have to make a lot of decisions, some people agree with some people don’t. You have to make a decision and go with. I appreciate the time, talents and most importantly, the memories that have been made. Fourth, THANK YOU, community. My family and I have been blessed to meet so many caring people along the way that have treated us great, we appreciate you!
"Raider Nation: THANK YOU, to the school board and administration at Southridge for believing in me and giving me the opportunity to come back home. I can’t wait to get started teaching and coaching over there. It’s truly a special place and I look forward to being “Back n Black!”Lastly, THANK YOU to my wife and kids. Man, this past week we have, laughed, cried and prayed a lot. I feel like I’m a person with has always puts others first, but it was time to myself and my family first. We are all excited to go back “home!”
"First pic is a pic from tonight. Breaking it down with the fellas one last time at FP (that was tough). 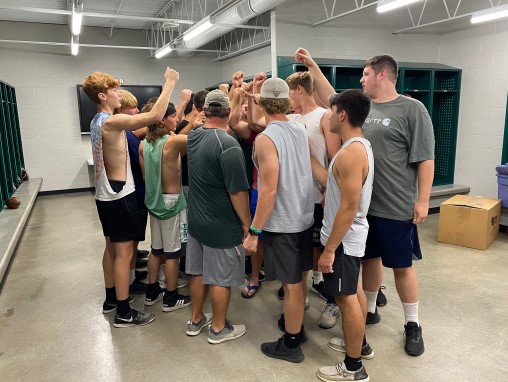 "Second pic, a helmet that was given to me when my dad passed away. I know he is smiling down. Thanks for all the support!" 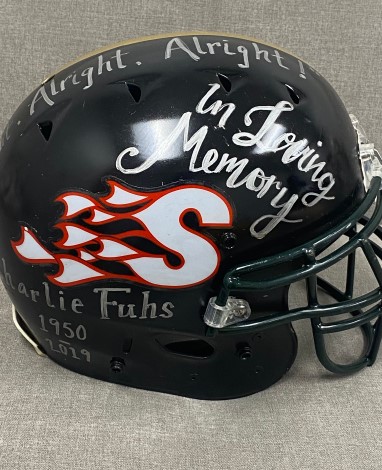