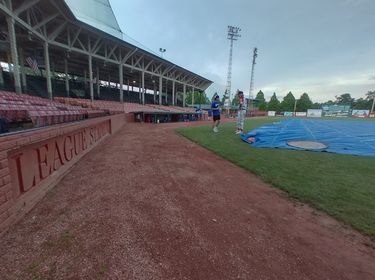 Huntingburg - On the tail end of an afternoon shower, the Dubois County Bombers came from behind to secure a 10-run rule win over the Owensboro RiverDawgs.

After a league-wide rain out on Monday, the Dubois County Bombers (2-2) were back in action Tuesday night looking to get back on the right side of .500; the Owensboro RiverDawgs (0-4) were looking for their first victory of 2022.

With Washington State University's Jack DeDenato on the mound in the first inning, the Bombers surrendered the first run of the evening. An RBI single from Daniel Lopez (University of Southern Indiana) drove in Jake Allgeyer, who reached on a single.

The Bombers trailed by the 1-0 margin until the bottom of the fourth inning, though things would quickly turn in their favor.

Josh Newton captured the first Dubois County hit of the evening, later scoring. RBI's from Cordell Coburn and Conner Oxley saw the Bombers end the fourth with a 3-1 lead. D.C. batted around in the fifth inning, plating an additional six runs.

The Bombers would go on to bat in Grant Hotchkiss in the sixth off a Dustin DuPont double, the lone run of the inning.

After a scoreless seventh inning, the Bombers carried a 10-1 advantage into the eighth.

Dustin Dupont and Cordell Coburn each finished going 2-4 at the plate with two RBI apiece.

On the mound for the Dubois County Bombers, Jack DeDenato got the start, finishing with one earned run on twelve batters through three innings of work.

The Bombers improved to 3-2 on the young season; the RiverDawgs fell to 0-5.

Dubois County gears up for the longest trip of the season, heading to Fulton for a Wednesday night matchup.

The Bombers will be off on Thursday.

Every Dubois County Bomber home game will be broadcasted by Roger Stuckey and Kris Norton on WITZ 104.7 FM and streamed worldwide at www.witzamfm.com.